Volkswagen has gotten itself into some very serious trouble over the past two weeks, after it was discovered that millions of its cars were fitted with software designed to cheat emissions tests. The German manufacturer, previously known for its economical and low-emission cars, is going through the worst crisis in its history.

Of course, the world’s tweeters had plenty to say about Volkswagen’s fall from grace. Using the Visibrain Twitter monitoring platform, we analyzed the 2,040,834 tweets posted between September 18th and September 28th to determine how the crisis unfurled on Twitter.

How did we do it?

This analysis is based on tweets captured using the Visibrain Twitter monitoring platform, containing either "Volkswagen", "VW" or "dieselgate" as exact expressions or hashtags. All times and dates are in GMT. 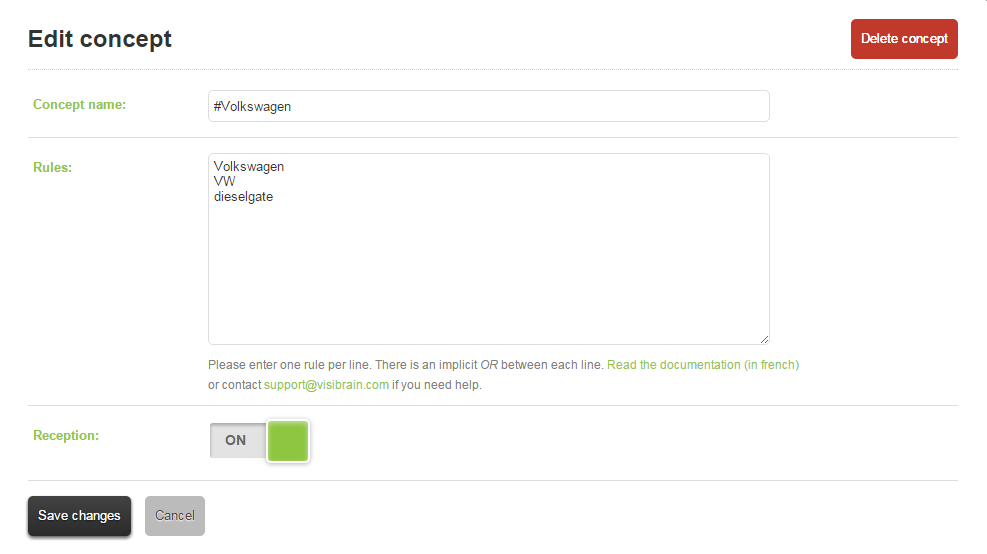 A crisis that got off to a slow start

Considering the seriousness of the allegations, the Volkswagen scandal took some time to gain momentum on Twitter.

The crisis broke on Twitter on September 18th, when news first got out that the US Environmental Protection Agency had accused Volkswagen of issuing its cars with the regulation-cheating “defeat system”. However, if we look at the screenshot of the Twitter timeline over the ten days of the crisis, we can see that things didn’t start to escalate until the following week. 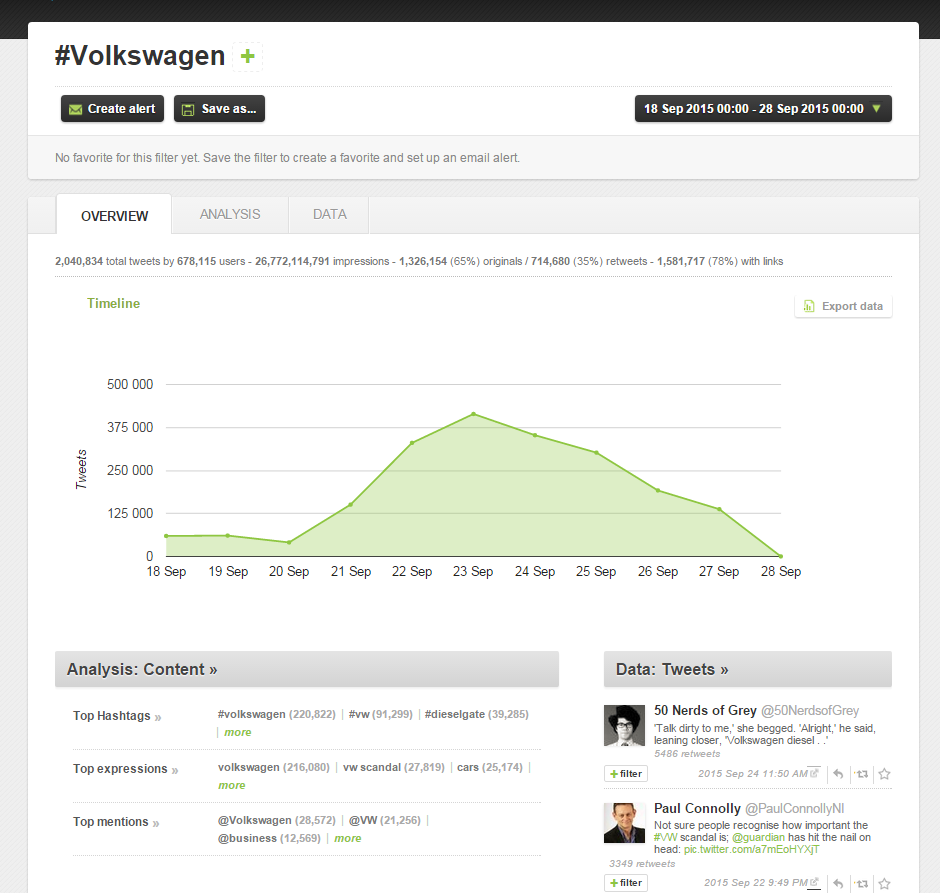 The tweet volume graph for September 18th shows that the number of tweets started to rise from 5.04 pm, when the New York Times @nytimes tweeted about the EPA’s accusations: 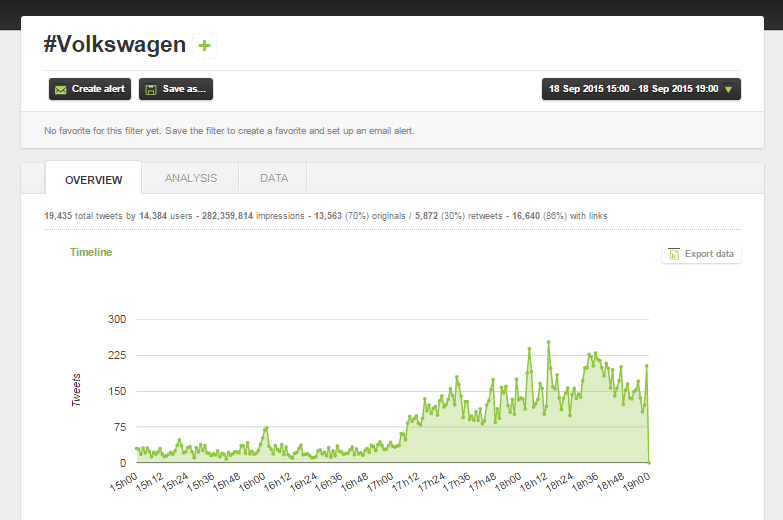 The revelation caused a brief spike in Twitter activity over the afternoon, before dropping back down to normal levels for the rest of the weekend. Unfortunately for Volkswagen, it was merely the calm before the storm.

The brief social media respite ended on Monday September 21st, when Volkswagen held up their hands to the allegations.

Bloomberg Business @business launched the Twitterstorm with their tweet about Volkswagen’s announcement and the resulting stock crash at 7.35 am: 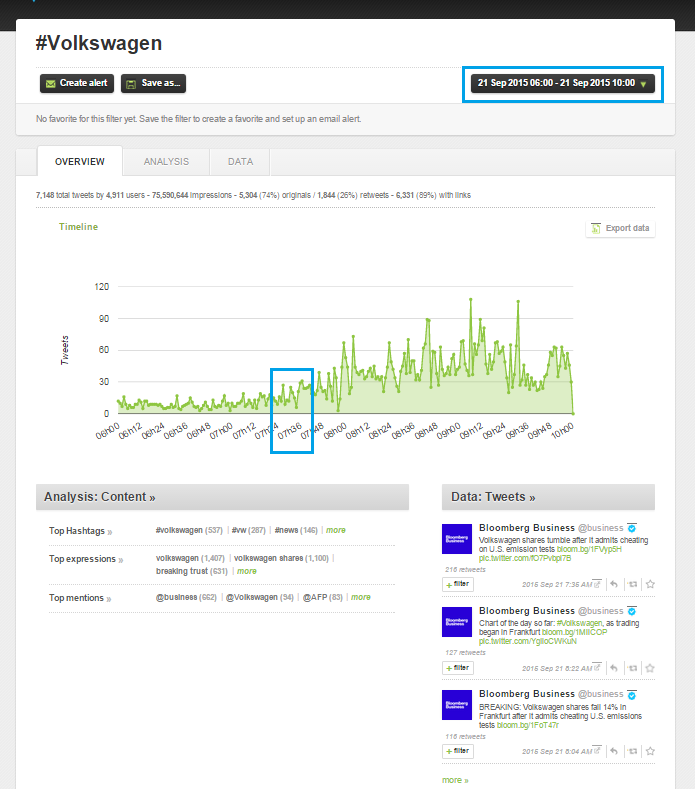 The number of tweets continued to escalate over the course of the day, reaching 154,794 tweets.

If we look at the most-retweeted posts sent on September 21st, we can see that six out of the top ten were sent by @business, making them not only one of the first to announce the news, but also the top influencer of the day. 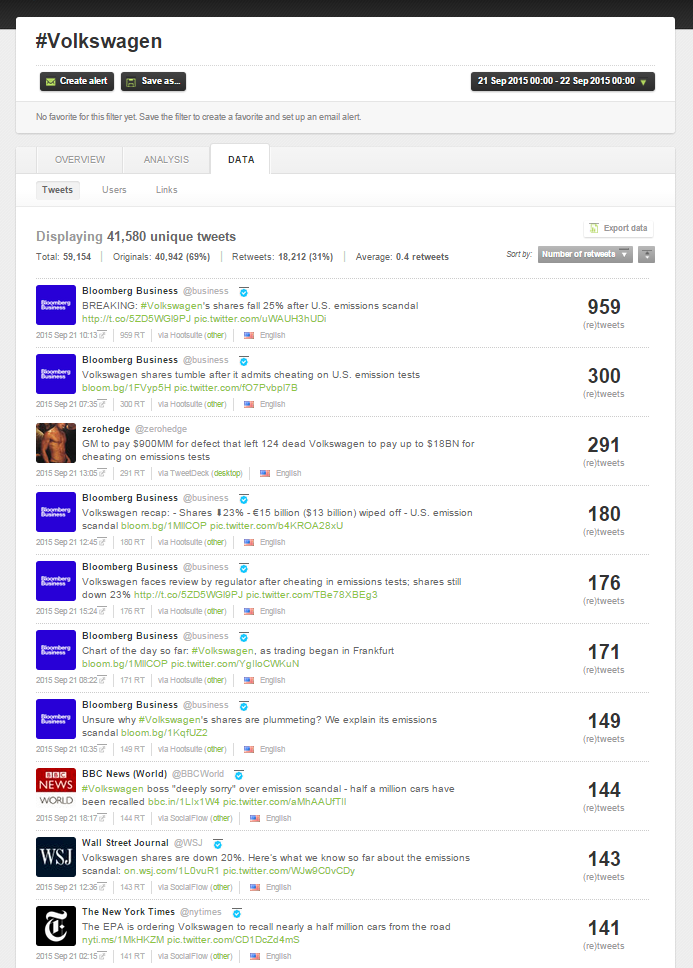 A dedicated hashtag that fanned the flames

It wouldn’t be a crisis without a dedicated hashtag. The #dieselgate hashtag was used for the first time on Sunday September 18th:

In light of #dieselgate I'm more convinced than ever that a 6-litre V12 is the way forward.

The hashtag got off to a slow start over the weekend but took off as news of the crisis went viral: on Monday September 21st it was used 948 times, and by the end of the week, it had appeared in 39,295 tweets.

If we take a closer look at the most influential users that tweeted the #dieselgate hashtag, we can see that it was used by high-profile media accounts accross the world, in many languages, which helped the crisis to become a worldwide trending topic on Twitter quickly. 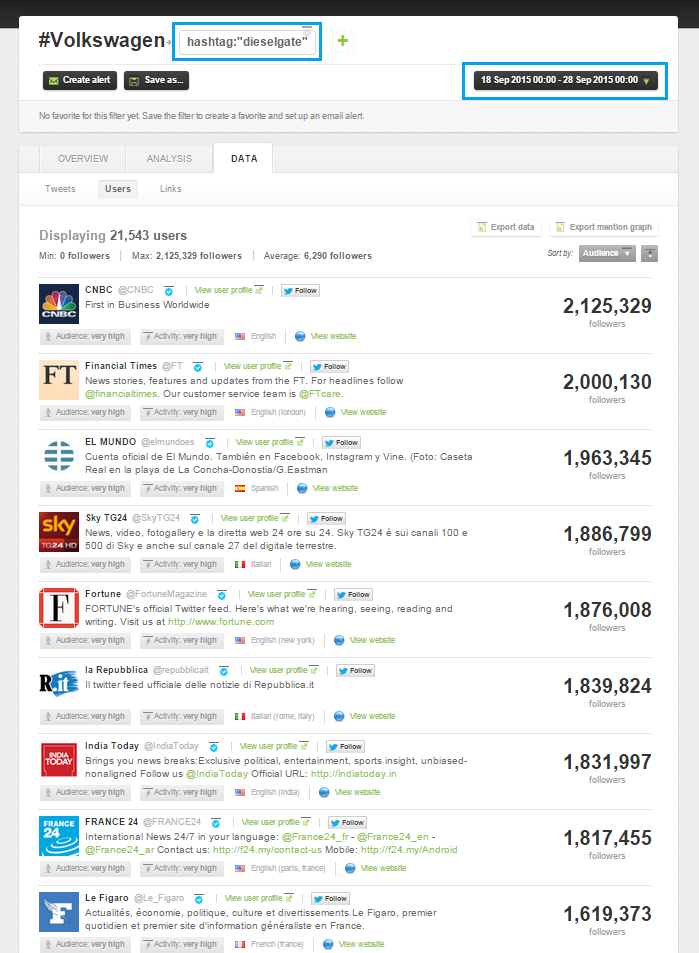 Tweet volumes continue to climb with each new development

Things continued to worsen for Volkswagen over the next few days. On Tuesday September 22nd, company stocks fell yet again as more details of the scandal were revealed by the press.

If we take a closer look at the tweets that got the highest number of impressions, we can see that @BBCBreaking, @CNNMoney and @nytimes all posted links to articles providing more information about the nature of the crisis: 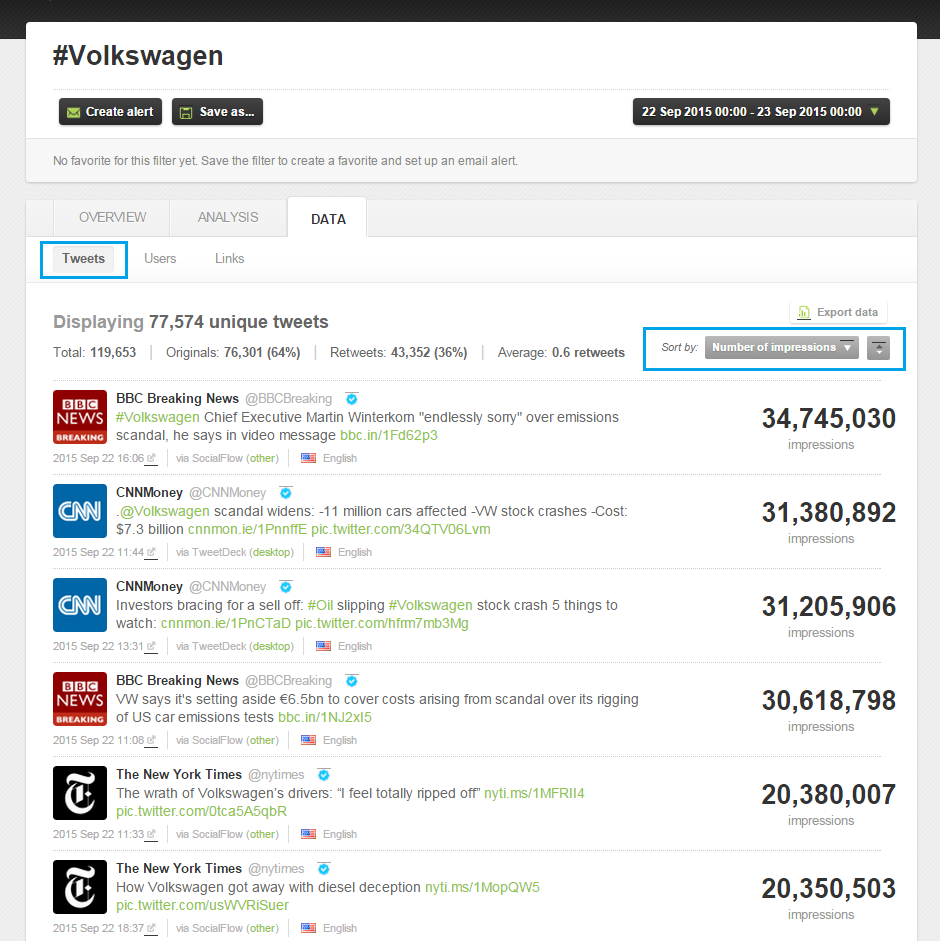 It was also when the Volkswagen Twitter account @Volkswagen tweeted about the crisis for the first time, publishing a video of CEO Martin Winterkorn issuing a formal apology for the company’s actions:

At the time this article was written, the tweet had only 89 retweets. This lack of engagement is not surprising, considering that it took the company a long time to react to the crisis on social media.

By midnight on Tuesday, the overall number of tweets had grown by another 330,349.

Tweet volumes around the crisis reached their highest point on Wednesday, when it was announced that Martin Winterkorn would resign as company CEO. Twitter activity peaked around 4 pm as news of the pending press conference spread:

Just in: #Volkswagen about to hold press conference. #dieselgate

By sorting tweets by time of post, we can see that journalist @TeleTrotman was the first to tweet about Martin Winterkorn’s resignation: 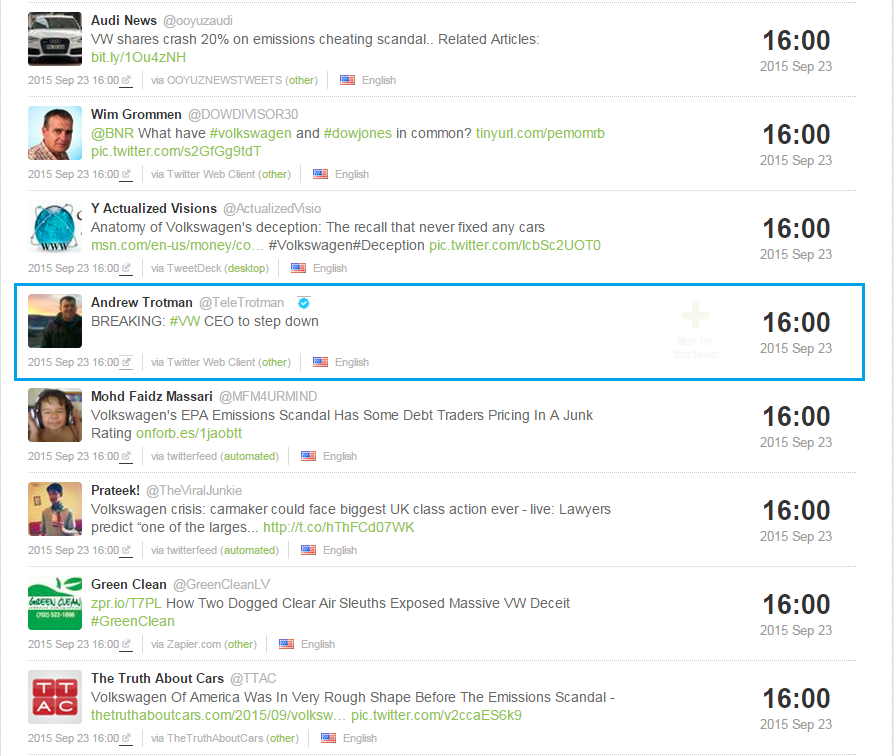 Just minutes later, the news had been tweeted by high-influence media accounts such as BBC Breaking News and Bloomberg Business, causing tweet volumes to go as high as 1,327 TPM (tweets per minute) at 4.11 pm. 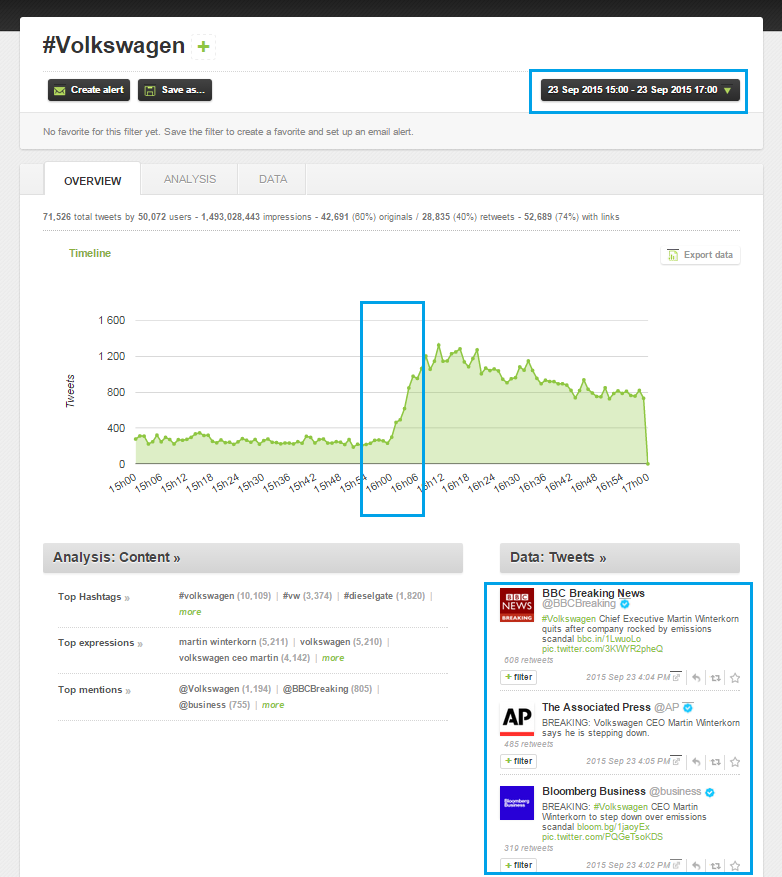 The news of Winterkorn’s resignation generated the most interest by far: 414,473 tweets about the Volkswagen crisis were sent on September 23rd alone.

Speculation continues around the future of Volkswagen

The number of tweets gradually died down over the rest of the week, but speculation continued around the future of Volkswagen and the diesel engine in general. A closer look at the top expressions used in tweets over the last few days of the week reveals that the appointment of the company’s new CEO, Matthias Müller, attracted a lot of attention: 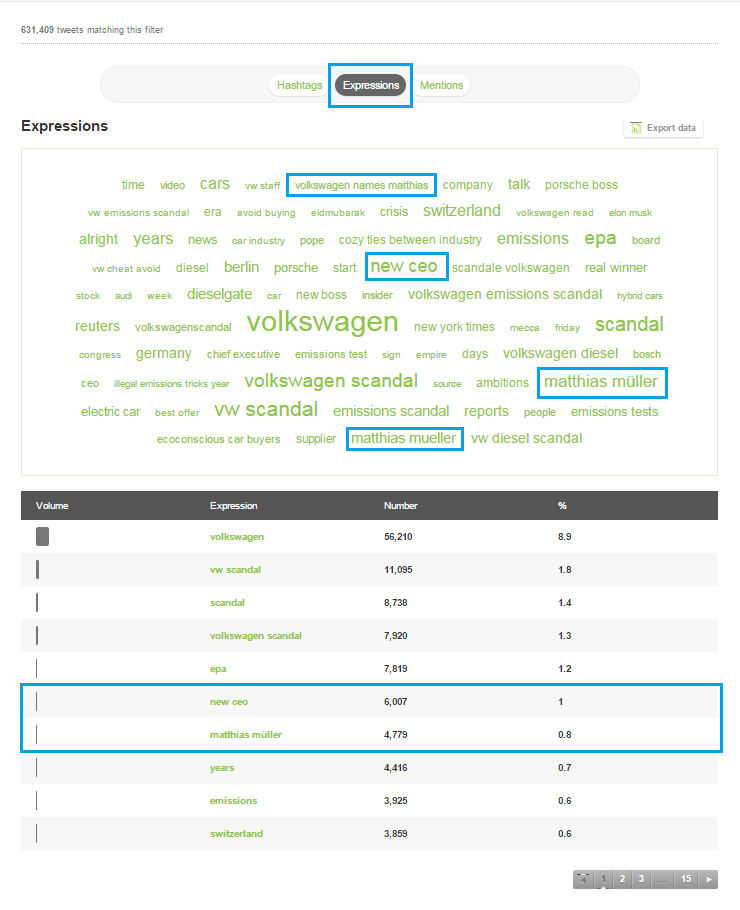 The Volkswagen crisis is far from over; there have already been over 400,000 tweets about the brand this week as the investigation into former CEO Martin Winterkorn gets underway.

Each new development in the story generates a new spike in tweet volumes, so we can expect to hear more about #dieselgate in the near future.