Texas mother Candace Payne shot to unexpected stardom this weekend after a video she posted on Facebook Live went viral. Her Chewbacca mask unboxing video, complete with hysterical laughter, was massively shared on social media and in the press. We used the Visibrain media monitoring platform to take a look at how Candace’s infectious giggles turned into a global phenomenon in a matter of hours.

A record-breaking video that took over the internet

Mrs Payne’s unboxing video, made with nothing more than a bit of fun in mind, unexpectedly took the internet by storm. Originally posted on Facebook Live, the video has since reached global fame of epic proportions: 140 million views on Facebook, half a million tweets and over 5000 press articles and blog posts.

It has been viewed millions of times on Youtube, and hundreds of copies, spoofs and reaction videos have been published using Twitter video, Vid.me, Dailymotion, Vine, and many more.

The #HappyChewbacca video turns into an unexpected internet sensation

The Chewbacca mask video was published on Facebook at 9.24 pm (GMT), and Candace’s infectious laughter was an instant hit with her viewers. Comments started trickling in as the video was increasingly shared: 9 hours later, the video had over 1 million views. If you still haven’t seen it, you can wath it below:

The video was tweeted for the first time a few hours at 1.44 am (GMT): 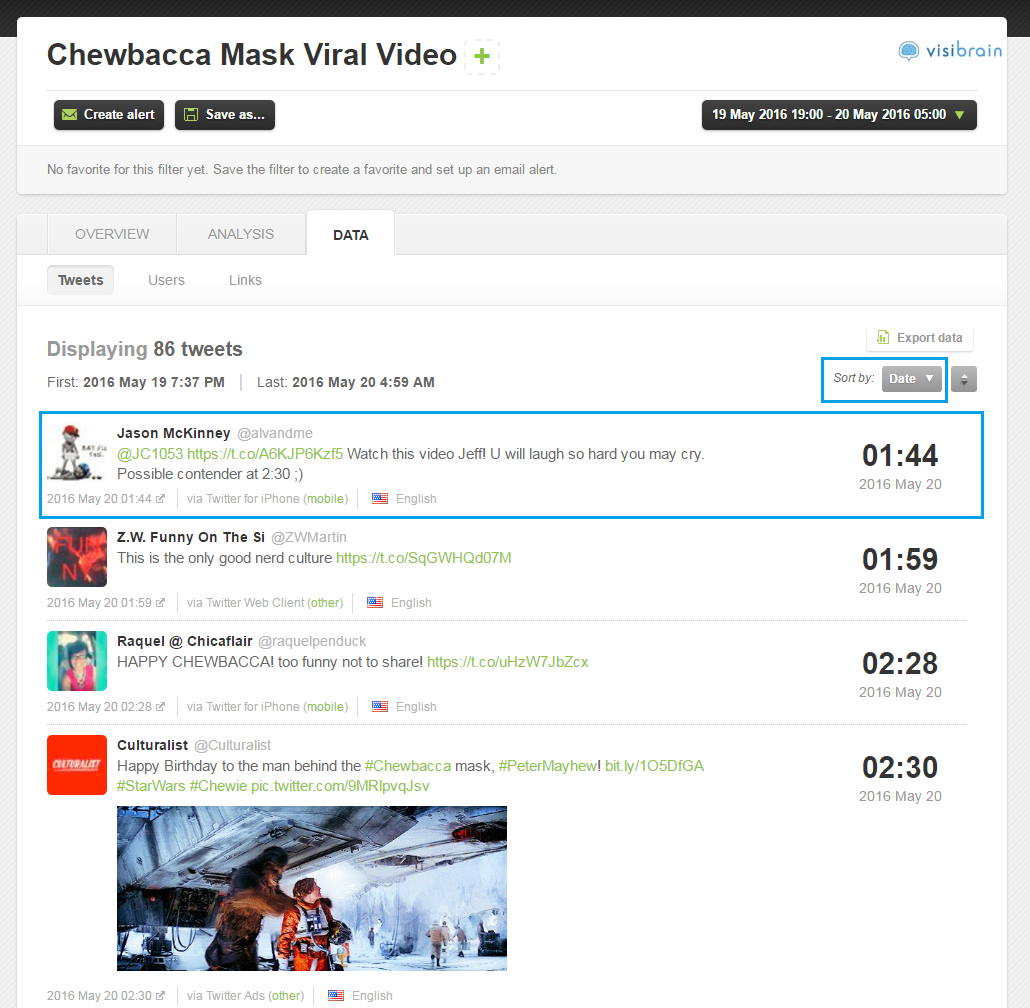 Mention volumes started to rise slowly as an increasing number of influencers began tweeting about the video, including @JustJared and Candace herself:

Press coverage of the video started the following day, causing online coversations to escalate rapidly. If we look at mention volumes on May 20th, we can see that after a slow start, a spike occurred between 1 pm and 2 pm, when Mashable published an article about the viral video: 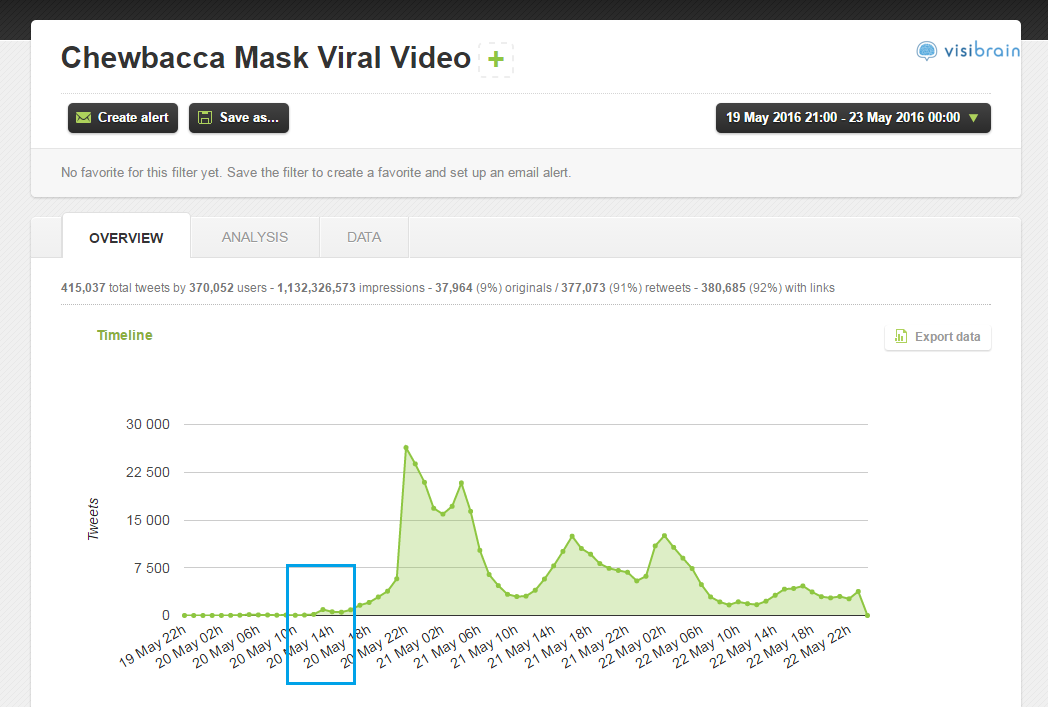 From that moment on, volumes continued to rise as more and more news networks started covering the topic. Some of the world’s biggest, including Mashable, the BBC, Buzzfeed, CNN and Vice all published stories about the Chewbacca Mask phenomenon: 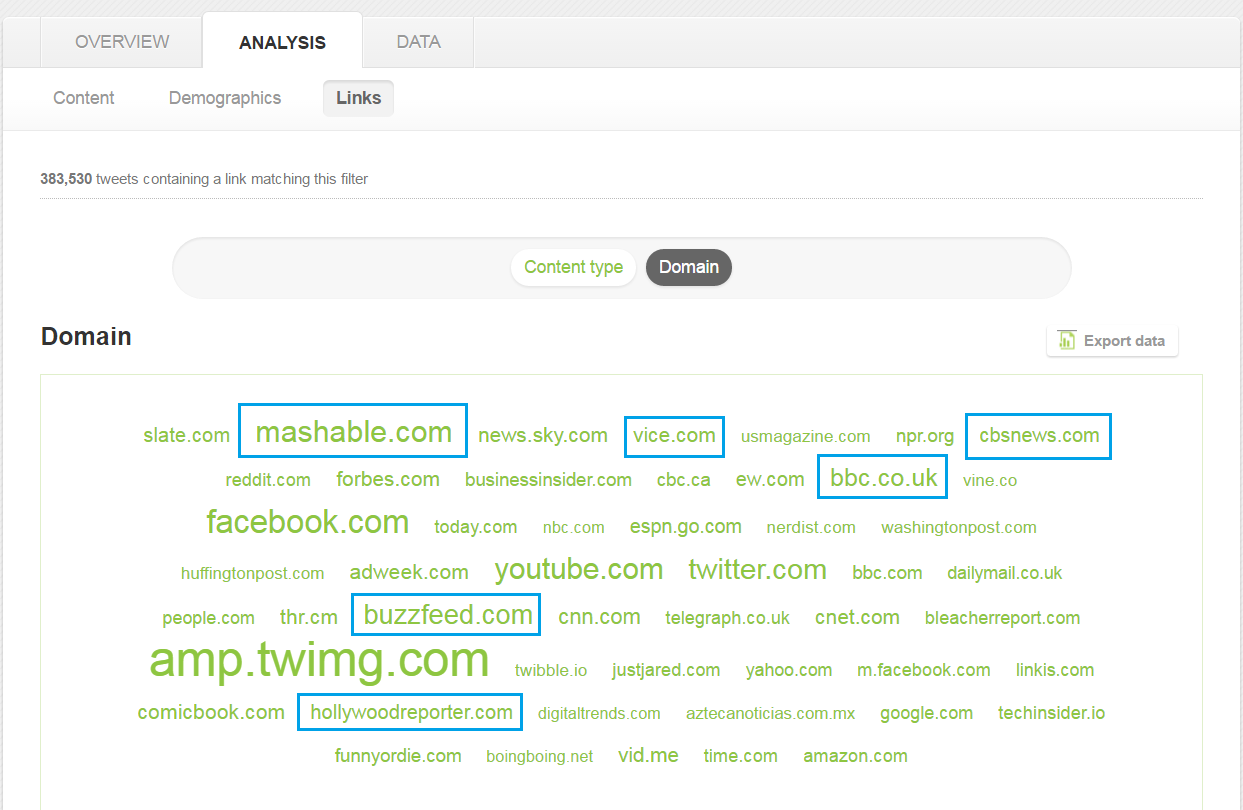 The video attracted the attention of top influencers, brands and celebrities, including actor Peter Mayhew, the original Chewbacca, and the official Star Wars Twitter handle:

"I'm such a happy chewbacca.." This lady is still making me smile. Lovely video to come out on my birthday :) pic.twitter.com/khUizi6nFf

Online mention volumes continued to rise over the course of the weekend as press coverage continued and the video was increasingly shared on social media, as well as on blogs and private messaging services.

Kohl’s, the store behind Candace’s purchase, was presented with a marketing opportunity that was too good to miss. The brand responded quickly, showering Candace and her family with surprise gifts. The resulting video, astutely named “The happiest Chewbacca”, was shared 49,647 times over the weekend on Twitter, and over 500,000 times on Facebook:

Candace made the Internet's day, so we wanted to make hers. Chewbacca masks for the whole fam (plus a little extra)! pic.twitter.com/6qst1LZc5Y

Candace didn't want to share her Chewbacca mask. So we showed up to make sure she didn't have to! #AllTheGoodStuffhttps://t.co/8gvLaj9VeF

The well-timed response also generated a lot of attention and positive feeling towards Kohl’s as a brand:

I'm still screaming, Kohl's gave her a bundle of chewbacca masks for her and her family https://t.co/PmMsTyv72E

Can you believe Kohl's even showed up at her house? https://t.co/vPC4Ma8AFN

The Visibrain Quicktrends graph below shows overall mention volumes and online activity around Kohl’s over the past 30 days. The huge spike that occurred over the weekend speaks for itself: 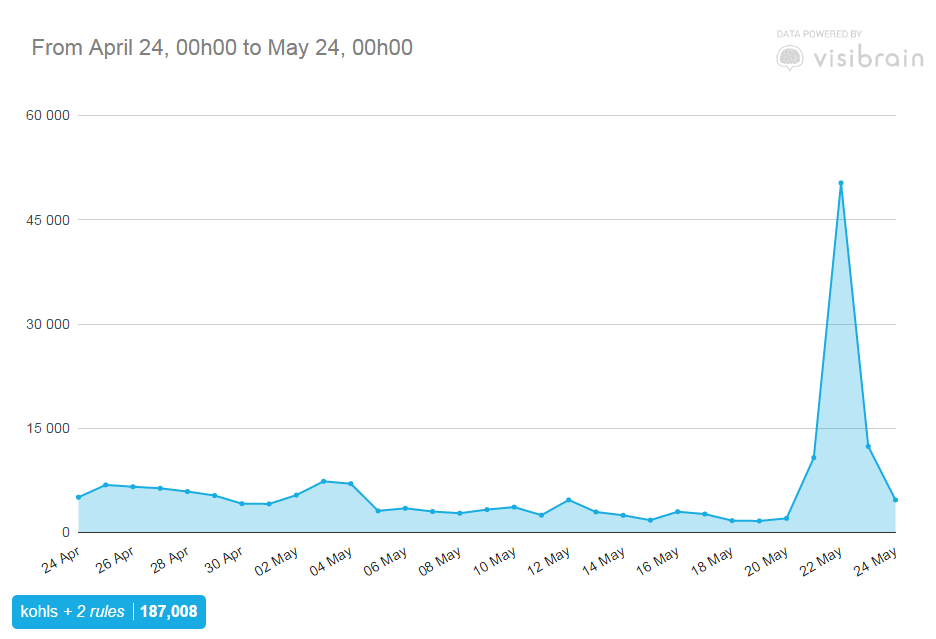 Kohl’s was mentioned 49,338 times this weekend, a vast increase in the usual amount of online conversation the brand.

The Chewbacca viral video shows just how important it is for brands to be aware of what is being said about them online: this incident was a golden opportunity for Kohl’s, and handled it brilliantly. It’s not an easy thing to do, as Red Lobster proved when they missed a similar opportunity during this year’s Super Bowl.

This case is also a great example of the power of social media: it can truly have a positive (or negative) effect on a brand’s image, and drive sales too: good luck with getting your hands on one of those Chewbacca masks anytime soon.

Want to read more of our posts? Stay up to date by subscribing to our newsletter and receive media monitoring best practices, social data trends & exclusive case studies: