Amazon launched the first Amazon Prime Day last week, a global shopping event that promised deals to rival Black Friday. Things didn’t go quite as planned however, as Amazon received harsh criticism on Twitter from customers who were far from impressed with some of the deals available.

So what went wrong for #PrimeDay? Using Visibrain, we can look back on the 158,521 tweets posted on Amazon Prime Day and find out how things unfurled on Twitter.

Things got off to a great start. With Amazon promising deals that outstripped Black Friday, the excitement had been building days before the start of the event.

On July 14th, the day before Amazon Prime day, there had already been 14,700 tweets using the #PrimeDay hashtag. 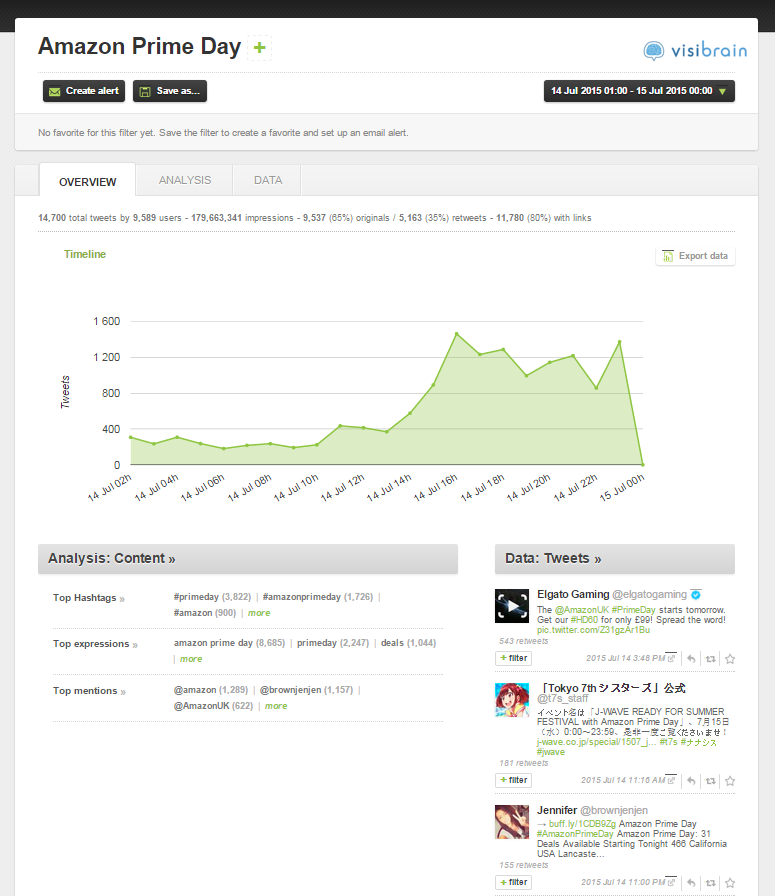 If we look at the top expressions used in tweets on the day before Prime Day, the word cloud shows us that the sales had attracted a lot of attention, with expressions such as “more deals than Black Friday”, “bargains galore” and “sneak preview of deals” standing out. 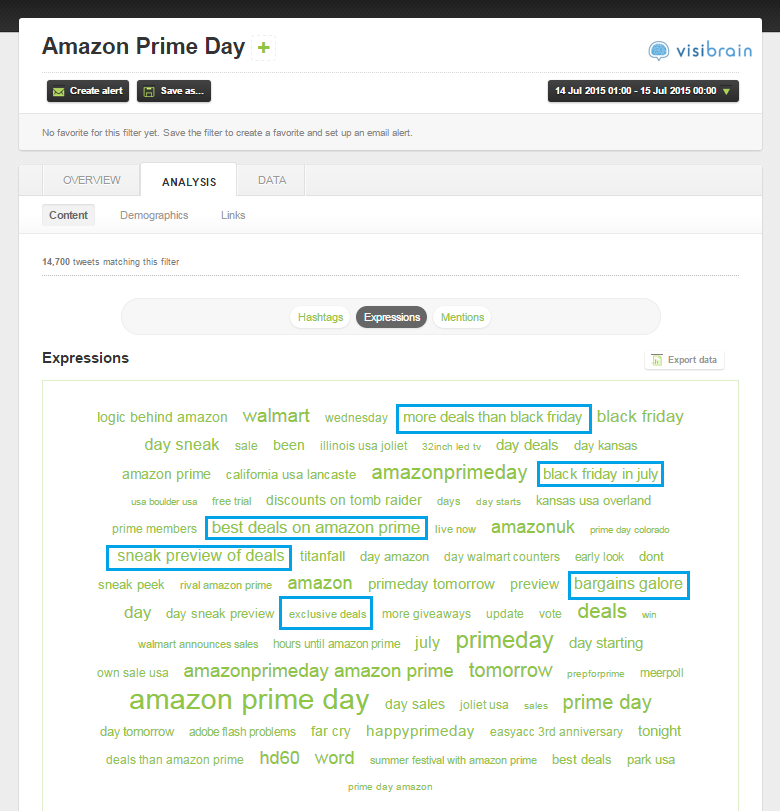 The number of tweets continued to rise steadily overnight until late Wednesday morning, and the best deals were hot topics on Twitter. If we focus on the most retweeted links between 6 pm July 14th and 12 pm July 15th, we can see that three of the top five links were tips on where to find the best deals. 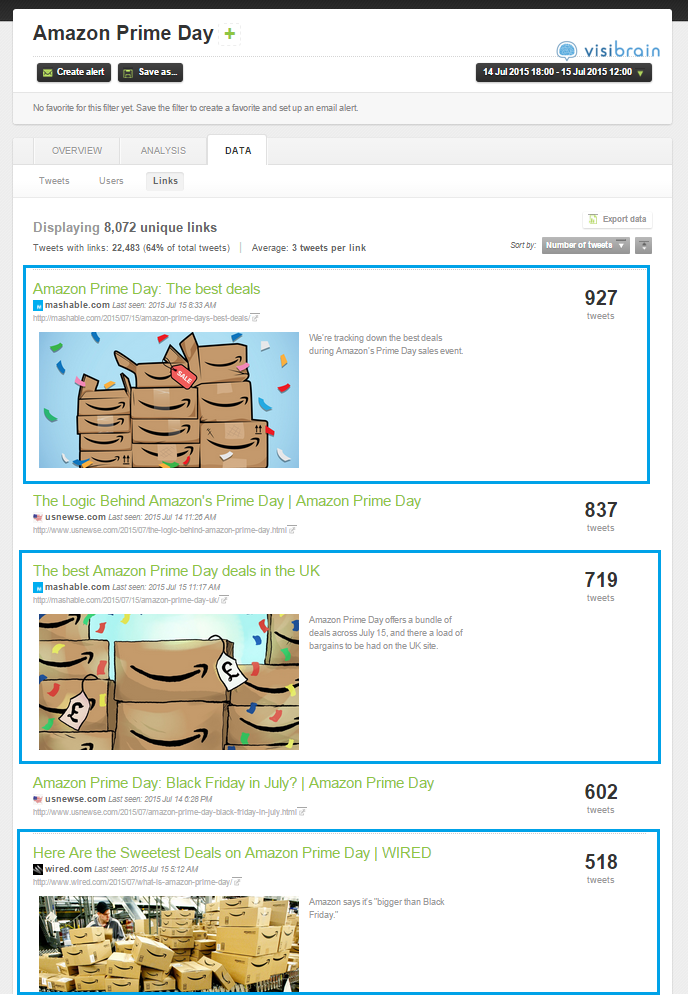 The sales turn sour with #PrimeDayFail

Unfortunately for Amazon, it didn’t take long for things to start going bad.

The best deals of Amazon Prime Day sold out very quickly, leaving latecomers with an eclectic selection of products that could hardly be called a bargain-hunter’s dream. Prime customers took to Twitter to express their disappointment, and from 12pm the #PrimeDayFail hashtag appeared in the most-used hashtags of the afternoon. 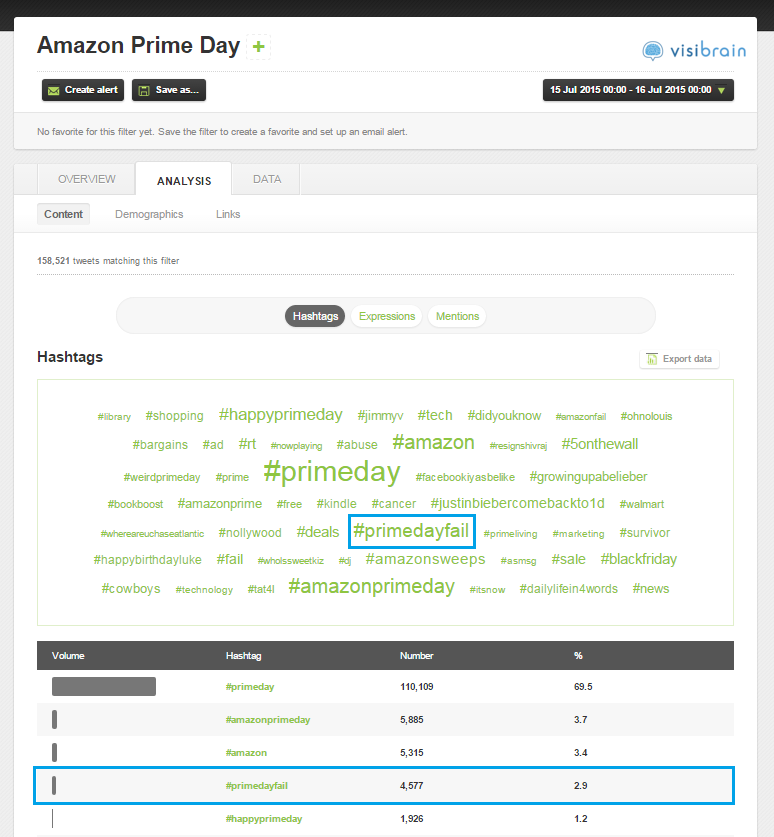 We can focus on the timeline for this particular hashtag to find out when it was first used. Although use of the #PrimeDayFail hashtag spiked significantly from 2 pm, it first appeared from 6 am, when customers who had stayed up late to try and get the best deals found themselves disappointed. 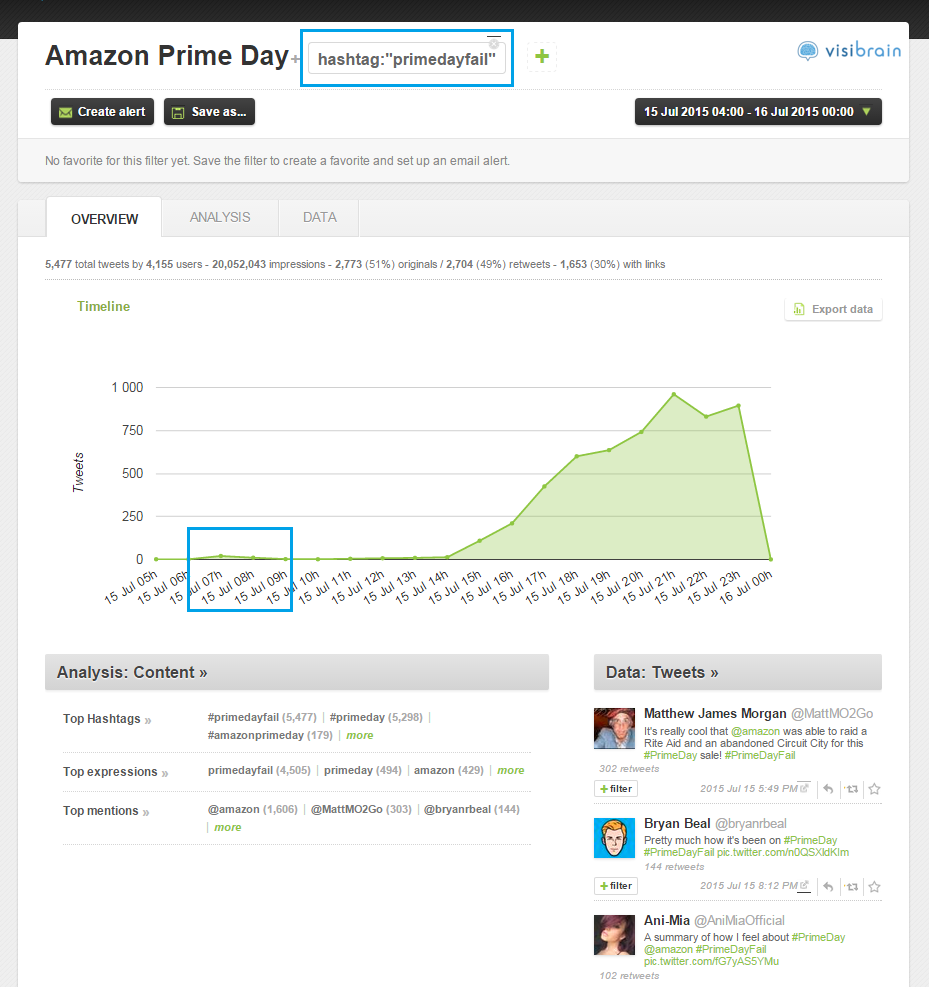 If we filter tweets by date and time of publication, we can see that the first tweet containing the hashtag was posted at 5.38 am by Alma Hayes-Belmont @ahayesbelmont. 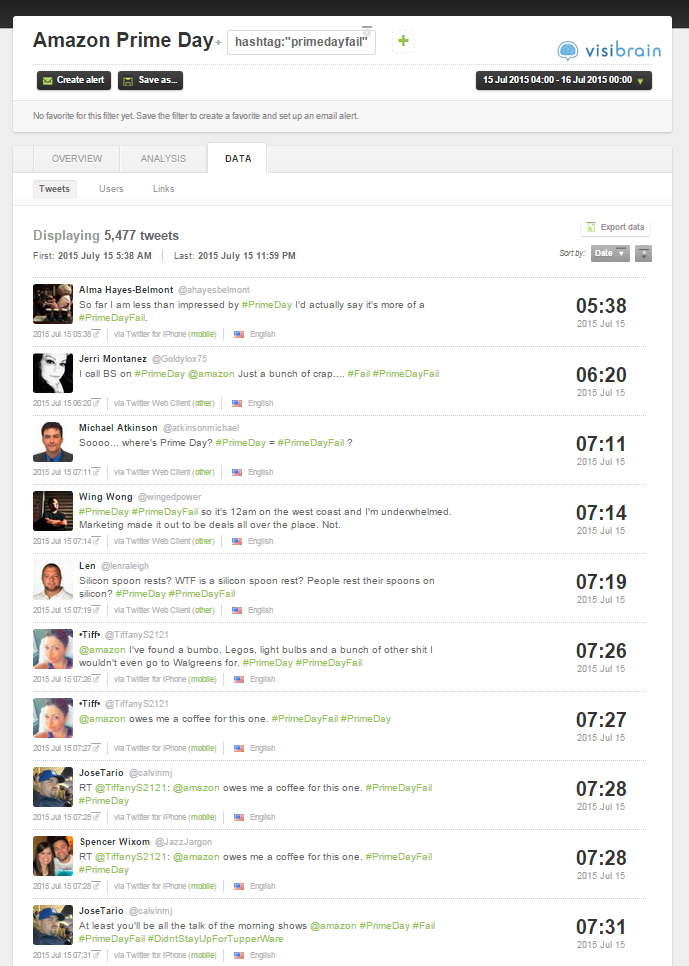 By the end of the day, #PrimeDayFail had been used 4,583 times, and by the following day, the number had increased to an impressive 31,827.

The #PrimeDayFail buzz certainly attracted a lot of attention. A certain number of high-influence media accounts and journalists tweeted about the widespread disappointment. If we look at tweets that gained the most impressions, we can see that news of the issues users were having with Prime Day reached millions of people. The top tweet came from Forbes reporter Ryan Mac @RMac18. 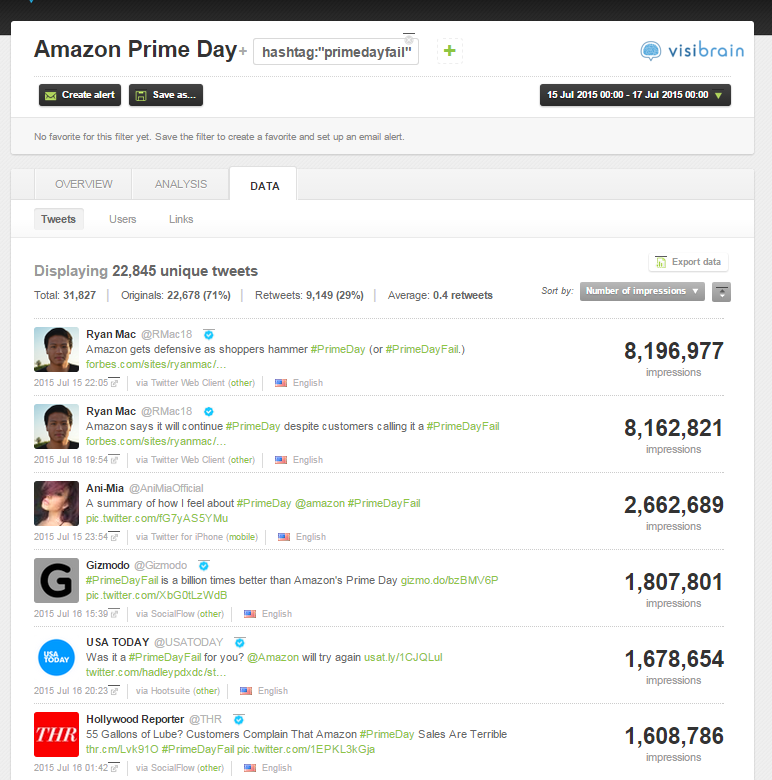 What seemed to make #PrimeDayFail so popular was its entertainment value. Some of the “amazing deals” on offer were pretty laughable and in typical Twitter fashion, users jumped at the chance to joke about the strange products to be had. The third top tweet of the day from Steve Tanner is a perfect example of just how much we all love to mock brands on Twitter:

Reading tweets about #PrimeDayFail is more exciting than #PrimeDay itself.

Listings have been made of the funniest #PrimeDayFail posts, and here are a few of our favorites:

I feel like I just went to my hoarder neighbor's garage sale. #PrimeDay #PrimeDayFail

Dear @amazon to punish you for this #PrimeDayFail I will be ordering a stick of gum a day for the next 30 days & choosing 2 day delivery.

Hey @Amazon, #PrimeDay is not Black Friday in July. It's April Fools' in July. #primedayfail

Things got even more uncomfortable for Amazon when people also used the opportunity to bring up other sensitive subjects concerning the company’s image, such as the company’s complicated tax commitments. On the morning of Amazon Prime day, the top tweet was this post from @davidschneider, retweeted 334 times.

Were the Amazon Prime deals really that bad? Not really. There really were a lot of good deals on offer. Unfortunately for Amazon, any tweets from those who did manage to get good deals were drowned out by the negative backlash.

A bad buzz that wasn’t all bad news for Amazon

@amazon tweeted 20 times over the course of Prime Day. Surprisingly, Amazon did not tweet about customer complaints using the #PrimeDay hashtag, only news about deals.

Prime Day is a typical example of how quickly things can get out of a brand’s control on social media. However, it was not all bad news for Amazon. The aim of Amazon Prime Day was to increase the number of subscribers at gain notoriety for its Prime program, and no one can deny that Prime Day brought a lot of attention to the brand.

The Visibrain feature allows us to focus on tweets linking to certain domains. If we look at tweets containing urls with the amazon.com domain, we can see that between July 15th and 16th there were 21,695 tweets linking to the Amazon website. 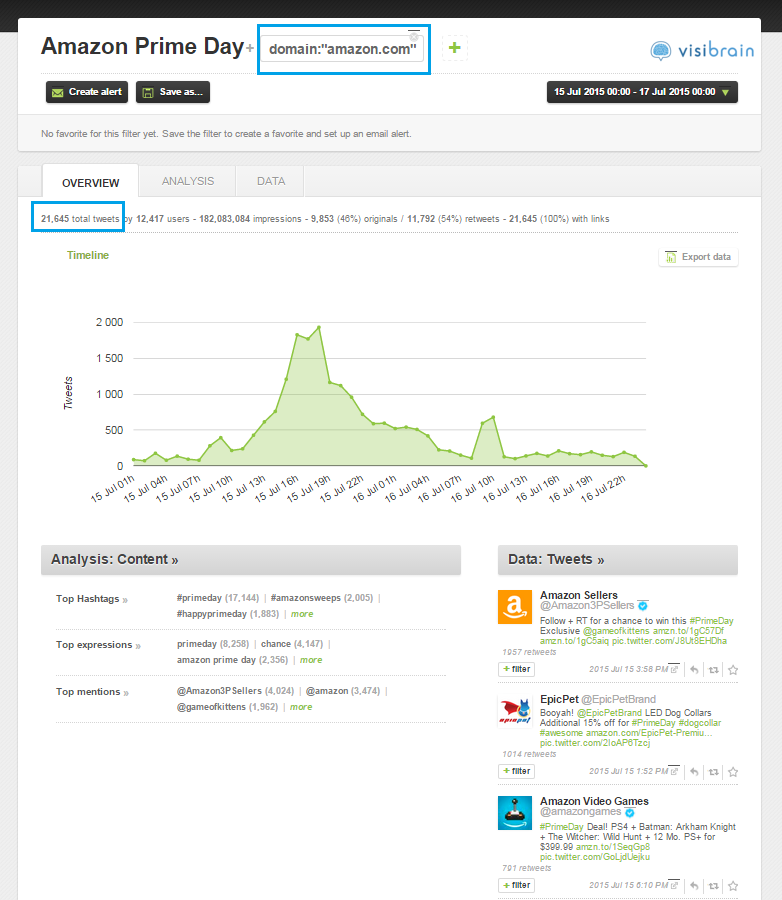 In spite of the bad press, Twitter still brought a significant amount of traffic to the Amazon website.

To try and get an idea of just how much impact the #Primedayfail hashtag really had, we can use the Visibrain Quick Trends feature to compare the number of uses of the #PrimeDayFail hashtag with that of the more general #PrimeDay hashtag.

Although the use of the #PrimeDayFail hashtag continued for longer after the end of Prime Day, it is still significantly lower than the overall number of #PrimeDay tweets, which is good news for Amazon. 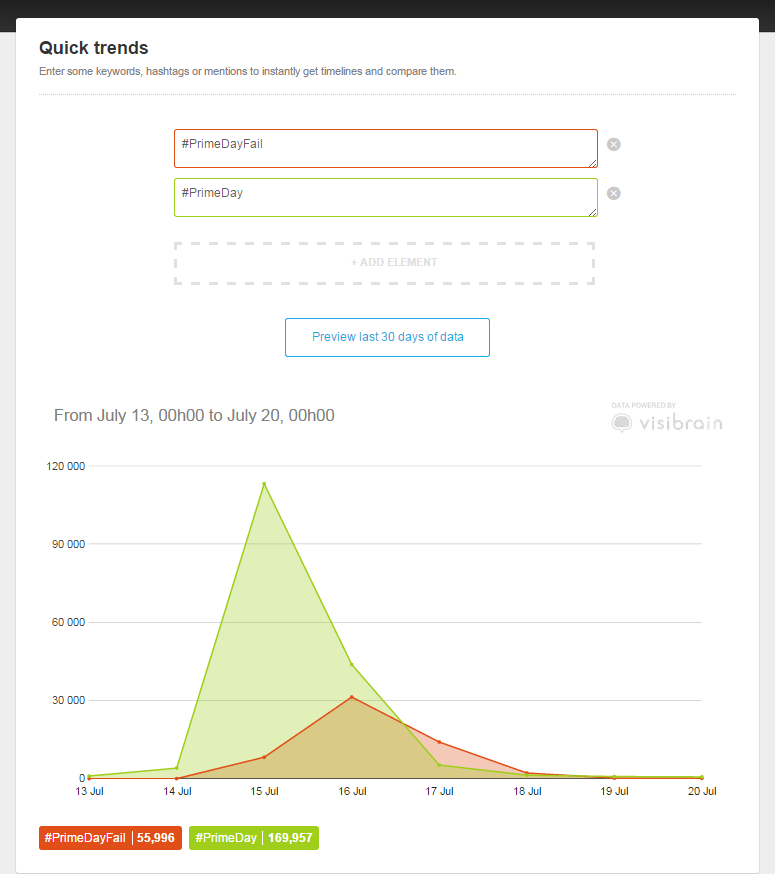 The first ever Prime Day may well have experienced a few teething problems, but overall the event went well. Amazon is still a brand that we all know and love, and the hiccup does not appear to have damaged their overall reputation.

The company have recently announced that in spite of this year’s setbacks, they intend to have another Prime Day next year. However, it may take a bit of work to convince this year’s jaded customers that the deals are worth a look.