The British monarchy is constantly in the spotlight, and the imminent arrival of a new member of the Royal family has been attracting international interest since the Duchess of Cambridge announced her pregnancy last year. So it came as no surprise when Twitter launched into Royal Baby fever for the birth of Princess Charlotte on May 2nd.

Using the Twitter listening platform Visibrain, we can retrace one of the most popular topics of the first week of May, simply by monitoring all tweets containing the #royalbaby hashtag. Step by step, we can cut through the 965,049 tweets published between May 1st and May 5th and reveal the stats and high points of the royal baby craze.

The last few days of April had already been tense, as Kate Middleton neared the end of her term and the “Royal Baby Watch” intensified. Using the Visibrain feature, we can zoom in on twitter activity from 6.30am to 8.00am for the morning of May 2nd. From 6.36am the number of tweets shot to 11,920 in less than two hours as word spread that the duchess had gone into labour, going as high as 256 TPM (tweets per minute). 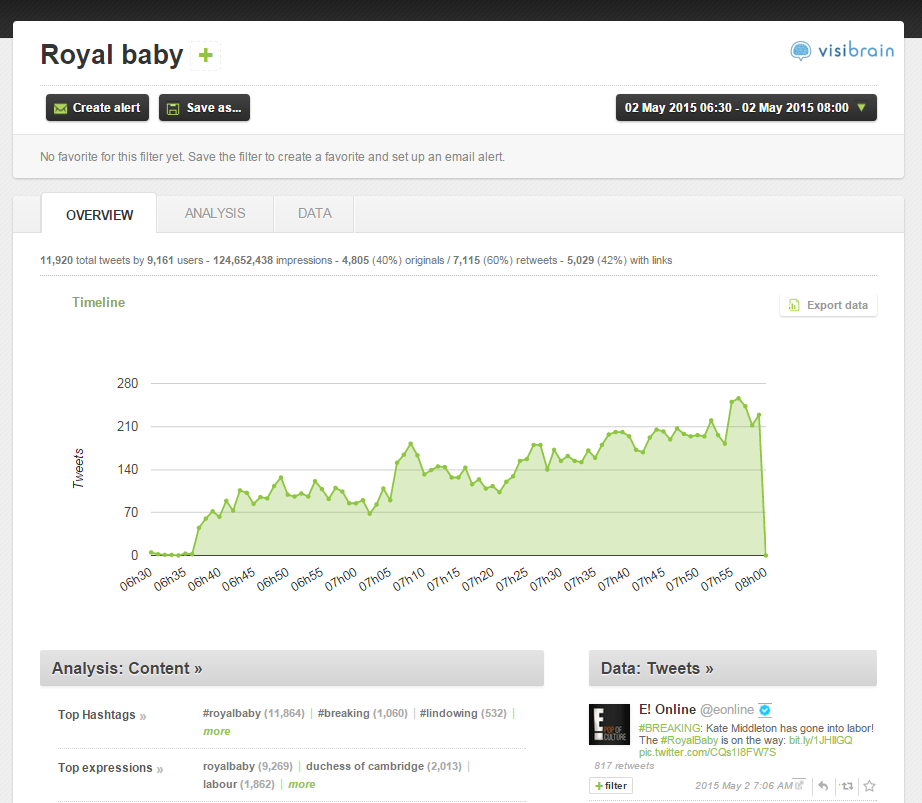 Why 6.36am? By sorting tweets by content and date, we can see that the rush of tweets was started by Sky News Newsdesk @SkyNewsbreak, who was the first to announce the news at that exact time using the #royalbaby hashtag. 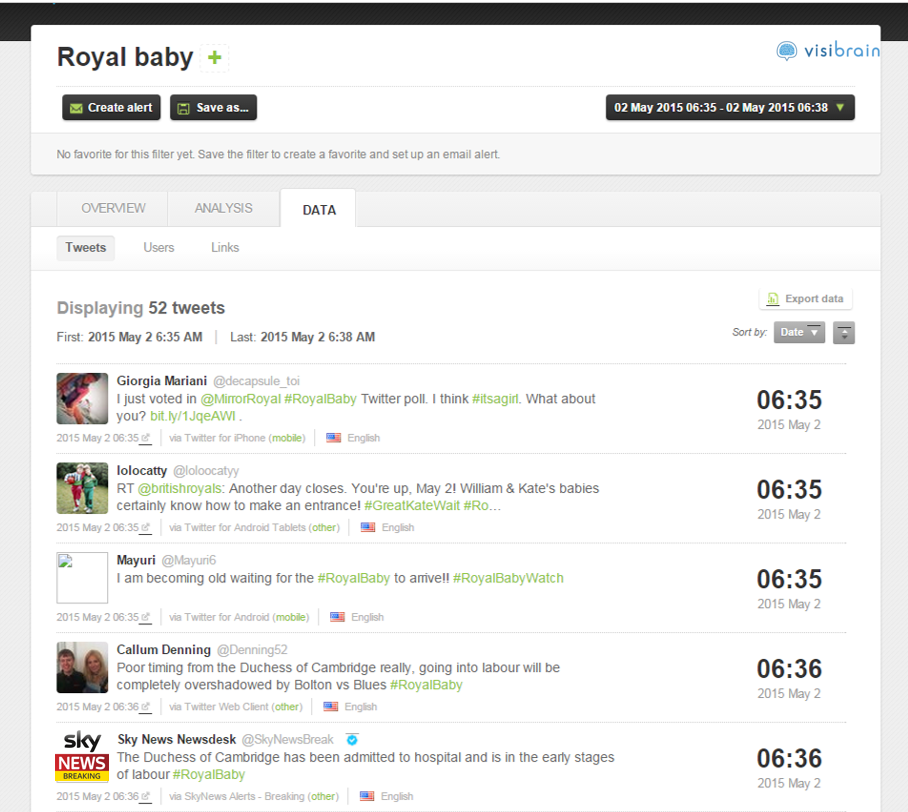 However, the birth of the Princess was announced soon after 11 am and number of tweets exploded, with 122,909 tweets in just one hour. 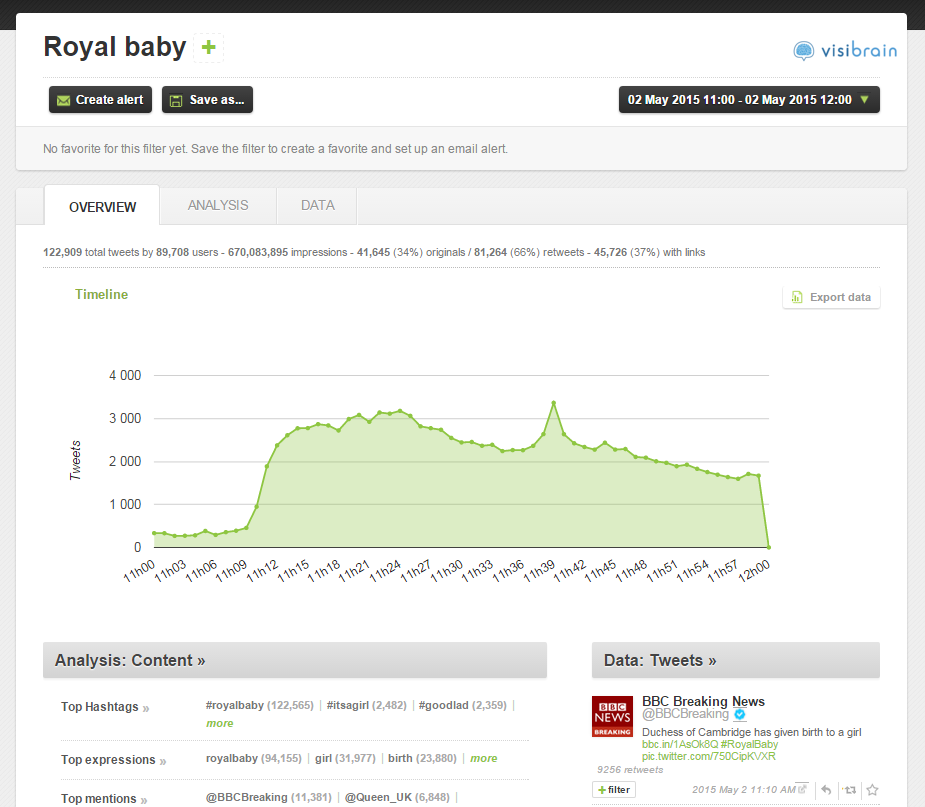 BBC News was among the first to report on the story, and the tweet « Duchess of Cambridge has given birth to a girl » from BBC Breaking News was the most retweeted of the day, with 14,969 retweets.

Duchess of Cambridge has given birth to a girl http://t.co/refeUOV9QR #RoyalBaby pic.twitter.com/750CipKVXR 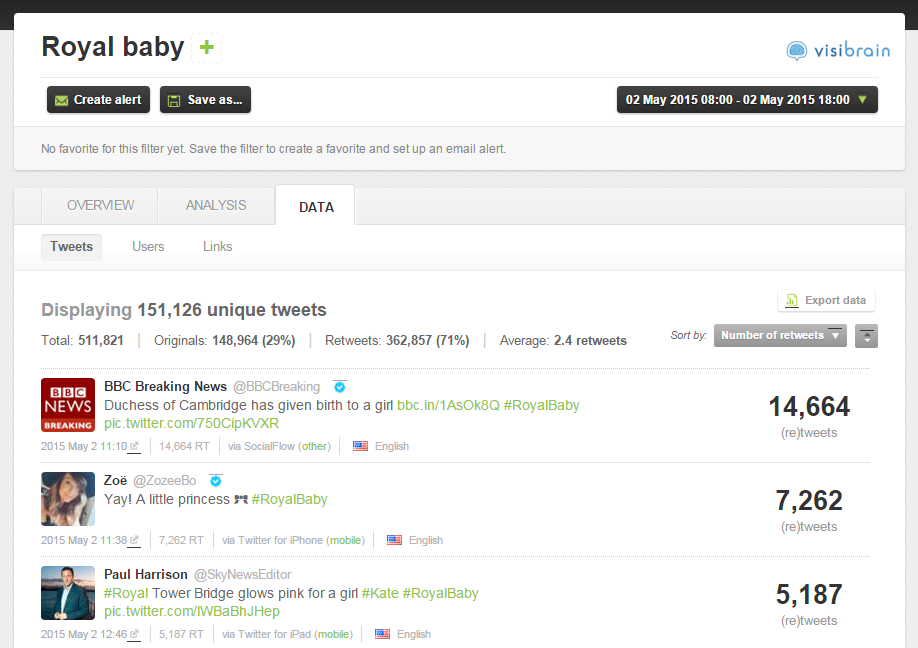 However, we can see that although the number of tweets was in decline from 11.25am, another brief spike occurred at 11.38am. As there were no new developments around the Royal Baby story at that time, only a deeper analysis of the available data will explain the increase in Twitter activity. A zoom-in on the two minutes between 11.38 and 11.40 reveals that 11.38am was the precise moment that successful fashion blogger Zoella @ZozeeBo tweeted “Yay! A little princess”.

The message that was retweeted 1,261 times in just two minutes. This use of the Visibrain feature helped to identify a major influencer, as with 3.28 million followers, Zoella briefly overtook even BBC Breaking News with the reach of this particular tweet. 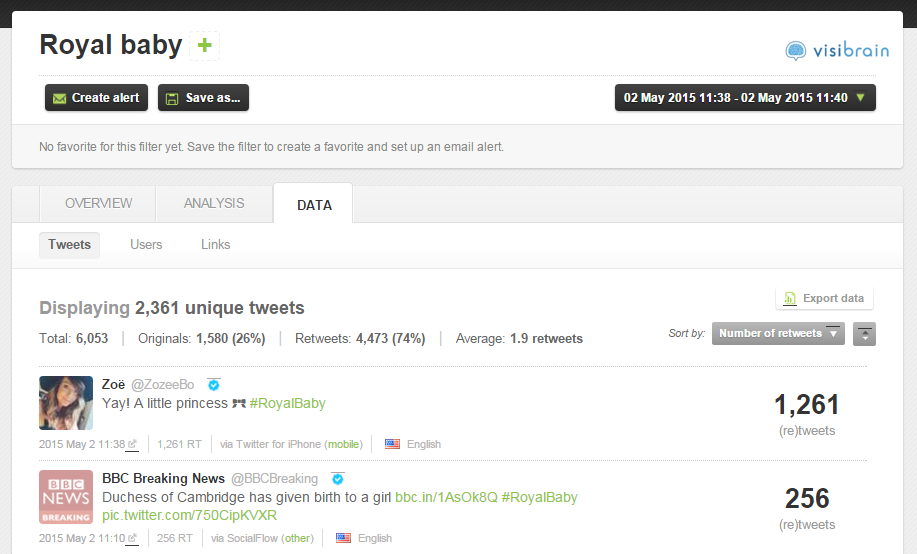 After a certain lull for the rest of the afternoon, the Princess made her media debut in the evening when she left the Lindo Wing of Saint Mary’s hospital in London with the royal couple just after 6pm. The number of tweets spiked again as the world scrambled to share photos of the baby.

If we use the Visibrain feature to zoom in on tweets containing links to photos during the time period from 6pm from 8pm, we can see that there was a significant rise in Twitter activity from 6.12pm, as influential users from the press such as E! Online (7,562,360 followers) and ITV News (680,594 followers) started to post photos. 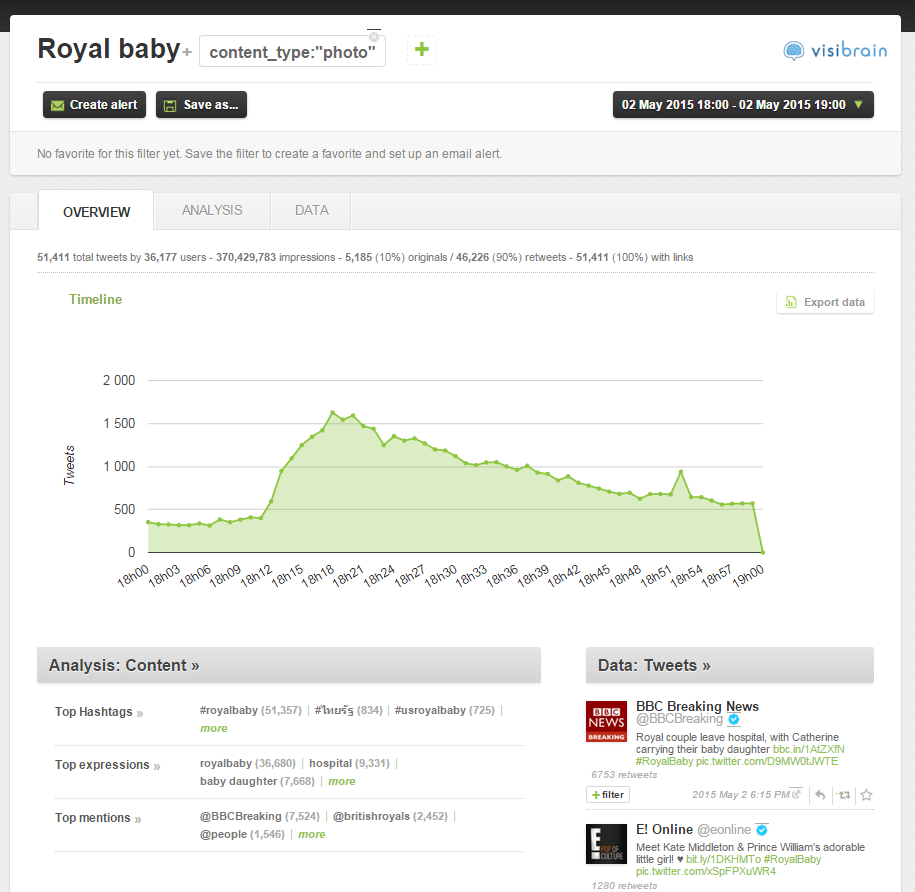 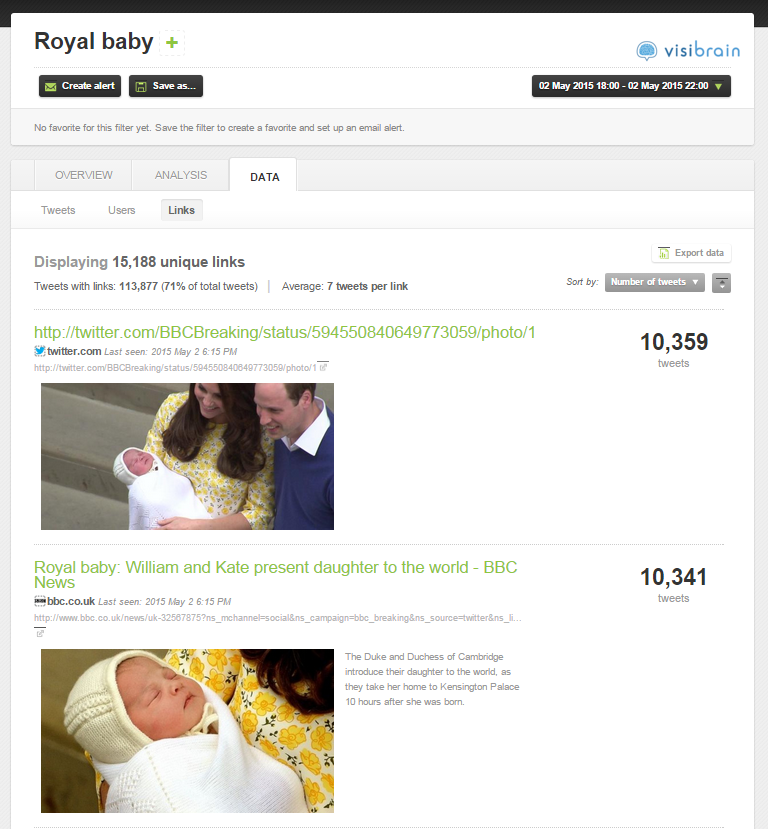 Unsurprisingly, 64.5% of the evening’s tweets containing the #royalbaby hashtag had photographic content. 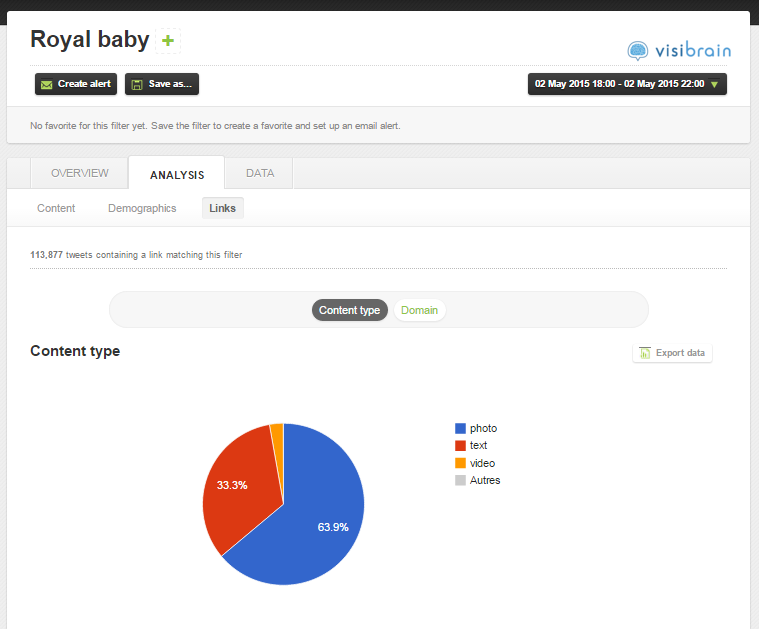 A busy weekend for the bookies

With the excitement of the birth and first appearance of the Princess over, the name of the fourth in line to the throne became a hot topic. Over the rest of the weekend, gamblers rushed to the bookmakers to place bets on the outcome.

By using “betting” and “bookies” as filter keywords, we can see that from May 1st to May 5th, there were 1,198 tweets containing the #royalbaby hashtag referring to bets made on what the name of the child might be. The most retweeted was sent by CNN International @cnni after the baby name was made official. 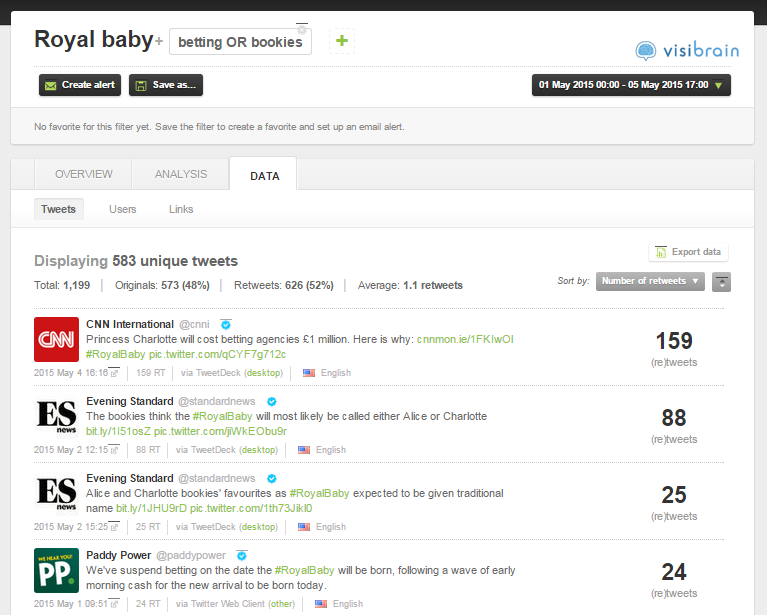 The buzz continued during the lead-up to the announcement of the Royal Baby name, from May 2nd to the afternoon of May 4th. Potential names thought up by Twitter users went from the sublime to the ridiculous, but certain favorites stood out from the rest: Charlotte, Alice, Elizabeth, Diana and Victoria.

By using these names as keywords in the Visibrain platform filter, we can see that 4,458 tweets with the #royalbaby hashtag contained the name Elizabeth, with 4,424 for Charlotte, 4,070 for Alice and 3,563 for Victoria. A staggering 13,707 contained the name Diana.

Based on these results, it would seem that Diana was a clear favorite for the Royal Baby name. However, we must of course take into account tweets referring to the deceased Princess of Wales, which add considerable noise to the data. The same rule applies for the name Elizabeth, as many tweets using that expression referred in fact to Britain’s current monarch.

With these factors taken into account, Charlotte and Alice appeared as the clear favorites. 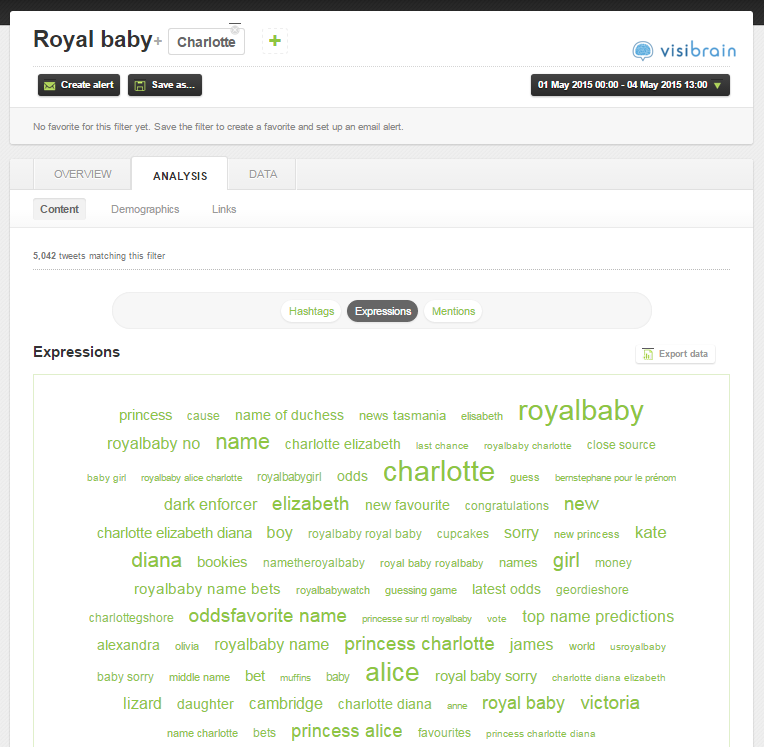 The Royal Baby’s name was announced on the afternoon of May 4th, sending the Twittosphere back into a frenzy. Charlotte Elizabeth Diana was one of the most frequently used expression in #royalbaby tweets on the day.

With the initial excitement over, activity has once again dropped back down to low levels. However, with over 1 million tweets in just one week, the birth of Princess Charlotte proves that the arrival of a new royal is still a big event, whether you’re a proud supporter of the British monarchy or simply a curious onlooker.