Over 12,000 users tweeted the hashtag between October 26th and November 1st, and we used the Visibrain platform to find out how Cadbury fans responded on Twitter, and the insights the brand can glean from the experience.

Cadbury is quite the British institution, and the brand has created many a family favorite over the years, some of which have since been discontinued in favor of new products. The Craveyard competition gave fans the opportunity to get a nostalgic taste of the past by voting to revive the treats they missed the most.

Combine that with some cute cartoon-style Twitter videos, retro appeal and a bit of Halloween festive fun and it’s hardly surprising that the campaign was a hit on Twitter.

The screenshot of the Visibrain platform below gives us a general overview of the campaign data: there were 15,108 tweets using the camapign hashtag between October 26th and November 1st, posted by 12,957 users. 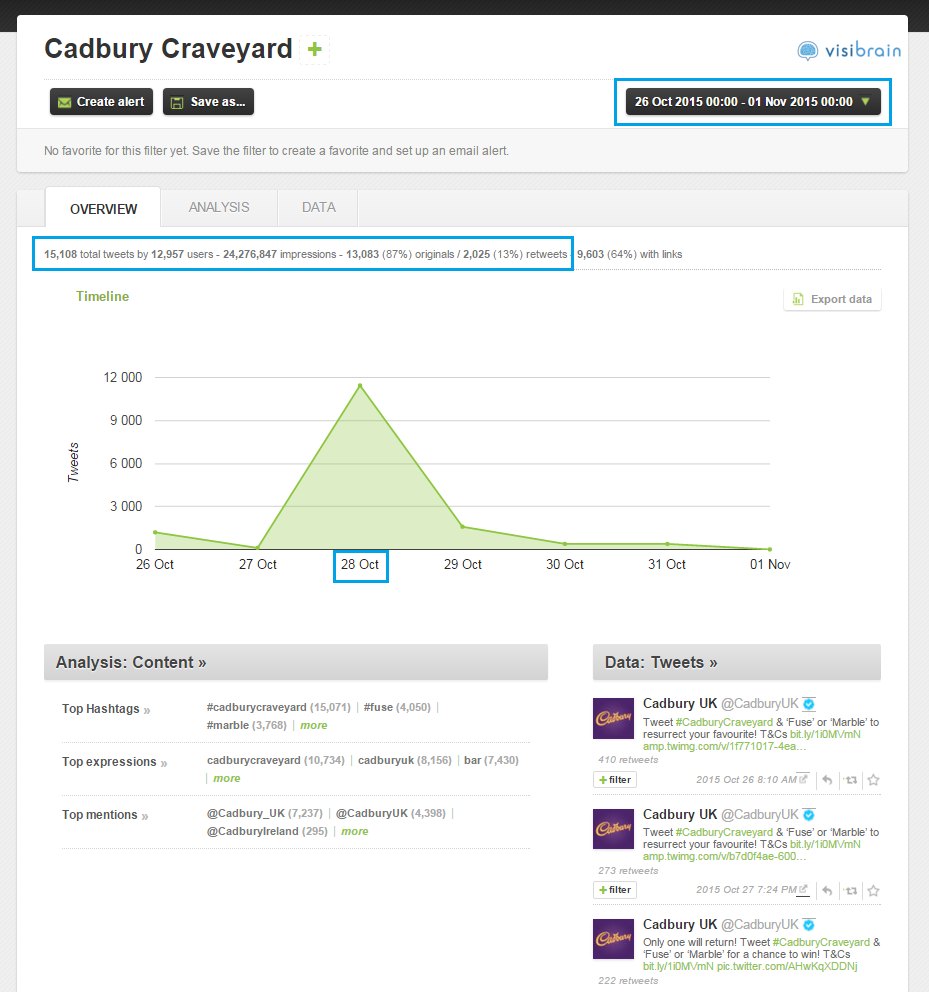 A quick glance at the overview of the campaign data reveals that 87% of tweets were originals. This shows that there was a high amount of participation in the competition: fans weren’t simply retweeting Cadbury or each other, they were getting involved and voting.

##Craveyard gets a boost from an influencer

@CadburyUK tweeted about the #CadburyCraveyard campaign for the first time on October 26th:

The overview graph above shows that although the first tweet appeared on Monday, things didn’t get going until Wednesday, when tweet volumes peaked sharply. Why Wednesday? Cadbury ran a trending topic to promote the competition that day, which is the main cause of the vast increase in tweet volumes. However, if we look at the top users that tweeted the #CadburyCraveyard hashtag on that day, we can also see that celebrity Rylan Ross Clark @Rylan took part in the vote.

Marble! And for the love of chocolate bring back Spira and Astros!!!!! @CadburyUK #cadburycraveyard https://t.co/w2k2RGn2ki

Although his post didn’t get many retweets, his audience of over a million followers gave the campaign a lot of visibility. By filtering on tweets that got the highest number of impressions, we can see that thanks to his large number of followers, @Rylan’s tweet got 1,306,596 potential impressions (meaning the maximum number of times his tweet could have been seen). This could be one of the reasons for the spike in participation. 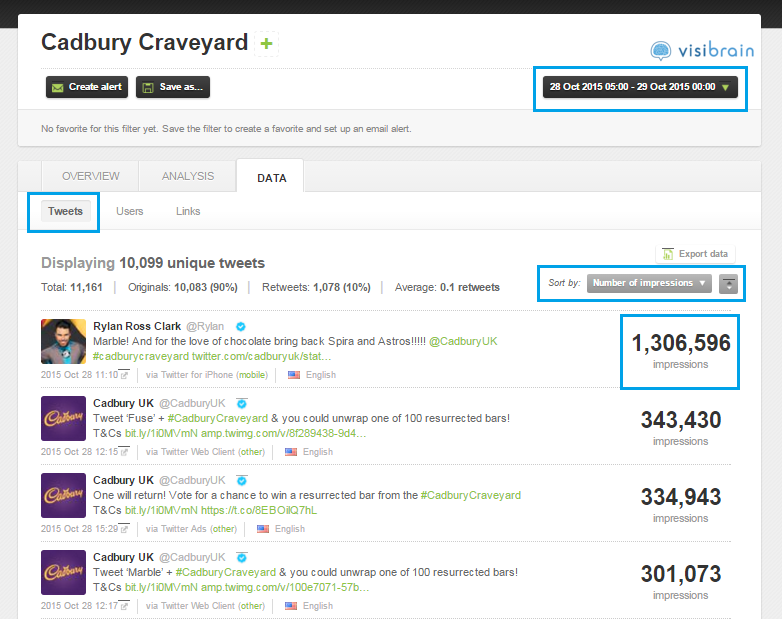 By the end of the day, there had been 11,448 #CadburyCraveyard tweets, compared to just 105 the day before, an impressive result.

@Rylan was also the top influencer for the #CadburyCraveyard competition. This kind of insight is invaluable for Cadbury’s influencer marketing strategy: knowing that they have a celebrity fan could be useful for the brand’s future campaigns.

Rylan may have voted for the return of the Marble bar, but did his choice influence the outcome of the competition overall?

The campaign ran until October 31st, and by using the Visibrain Quick Trends feature to compare the number of tweets for each bar, we can see that on October 30th it was still a pretty close vote: Fuse was in the lead by 692 tweets. 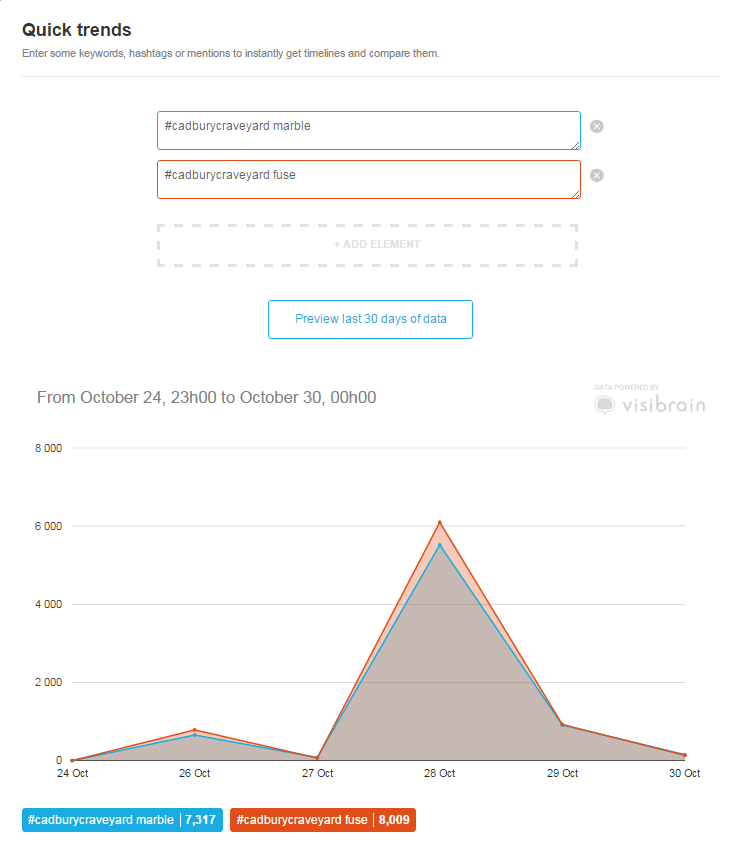 The winning bar was announced by @CadburyUK just in time for Halloween:

The votes are in! And the treat resurfacing for 100 lucky winners is…#CadburyCraveyard T&Cs https://t.co/rCSOgtUAmN https://t.co/vInqEvbnev

However, some Cadbury fans expressed disappointment that only the competition winners would be able to get their hands on a Fuse, and that the bar wasn’t going to be available in shops: 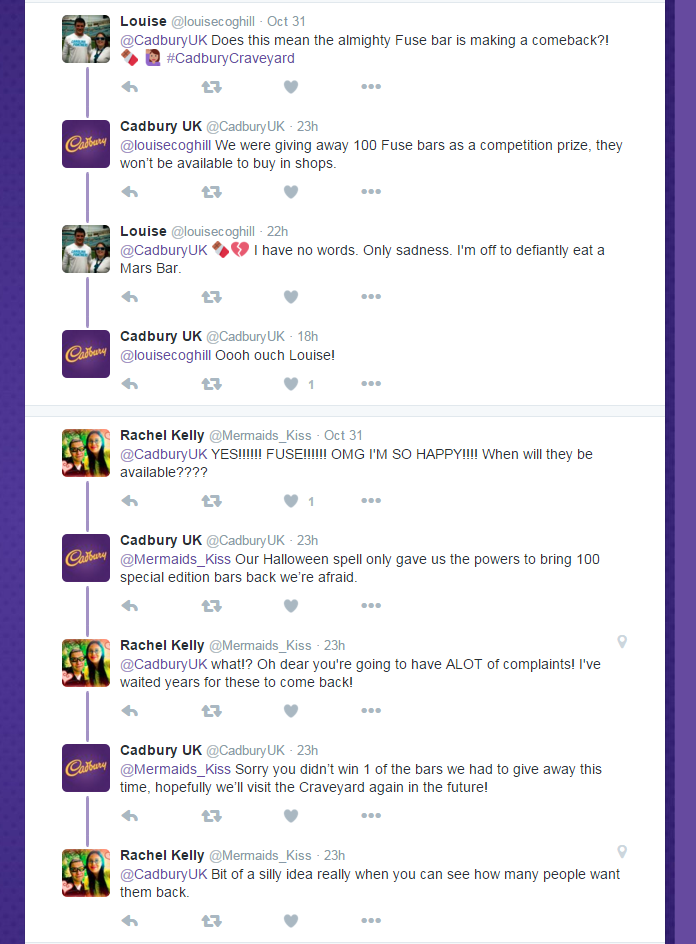 @CadburyUK dealt with the complaints gracefully, if a little evasively.

A source of brand insights

This type of campaign, as well as developing brand awareness and identifying influencers, is ideal for collecting insights about consumers.

If we take a closer look at the campaign demographic data, two things stand out. First of all, 64.2% of users taking part in the vote had low audiences (50-250 followers) or very low audiences (under 50 followers). Users with very high audiences of over 5000 followers represent just 2.7% of participants. 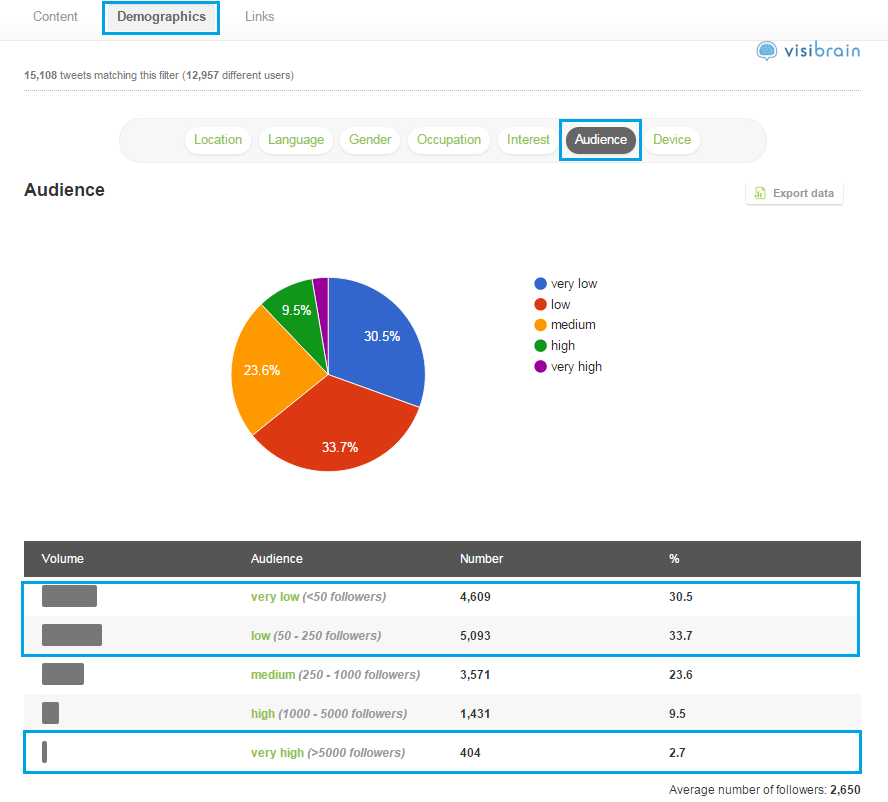 What we can glean from this is that the campaign attracted little media attention, most of the #CadburyCraveyard voters were everyday fans and customers, not high-audience influencers.

If we focus on gender percentages, it would appear that the “women love chocolate” cliché is about right in this case: 63% of people tweeting about #CadburyCraveyard were female. 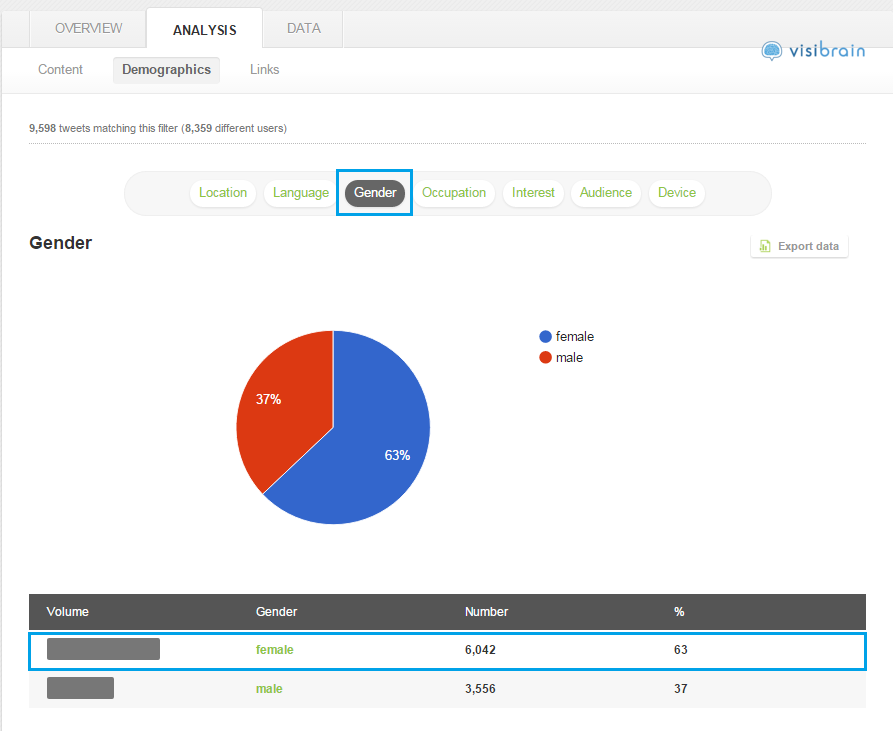 The word cloud and list of top expressions used in tweets below shows that as well as Marble and Fuse, Cadbury fans were also tweeting about other products such as the Spira, Astros, Taz bars, Cadbury Snaps, the Snowflake, the Milk Tray bar, and the Dream. 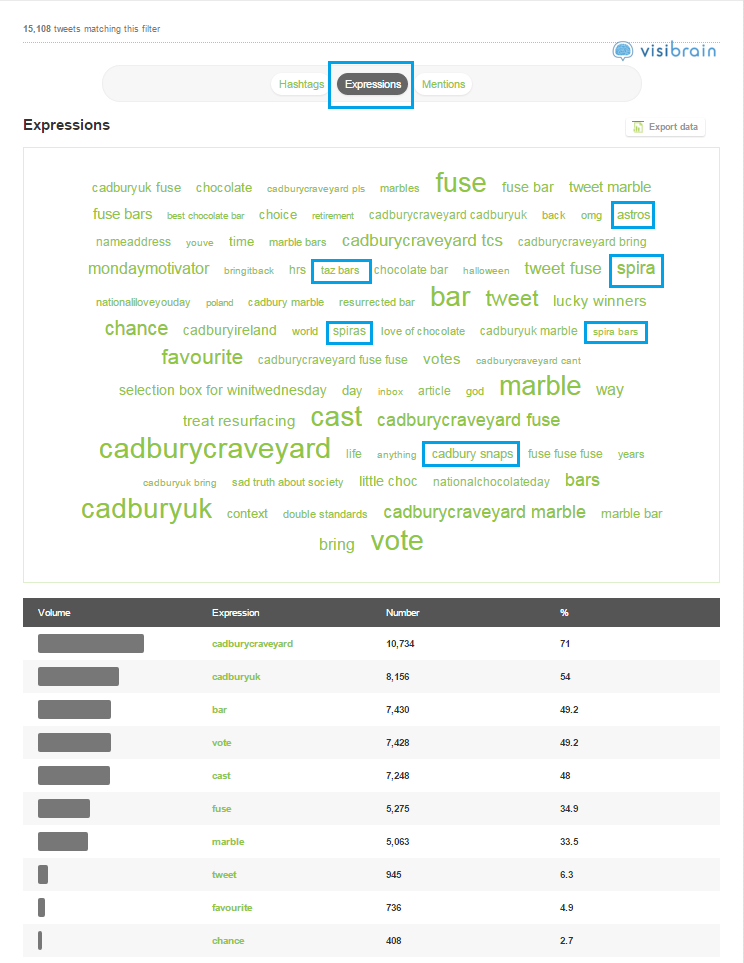 The Spira was by far the chocolate bar that got the most mentions: 347 tweets such as the one below called for its return. 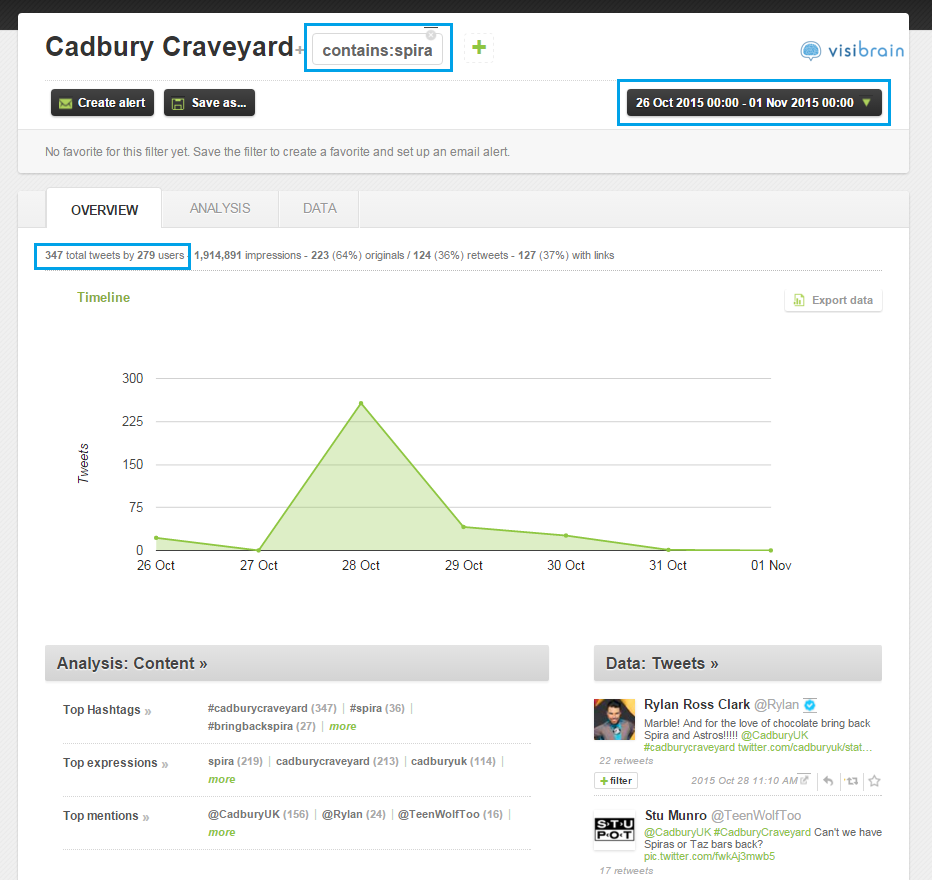 Some participants even tried to start a hashtag to campaign for the return of their favorite treat: #bringbackspira. Unfortunately for Spira fans it didn’t take off, and was only used 28 times.

However, this type of information provides some interesting insights for Cadbury in terms of what their customers would like to see in future campaigns, and even return to the shelves for good.

Cadbury Craveyard was a relatively successful campaign that generated large amounts of engagement with fans. It also turned out to be a source of interesting customer insights for the brand, but will they be acted upon? We will have to wait and see if any of the products listed above make a comeback in the future.