It seems that nostalgia was the watchword for the fast food industry last month. Just days after McDonalds brought back the Hamburglar, KFC surprised their fans with the revival of historical brand mascot, Colonel Sanders.

In an attempt to refresh the franchise’s dwindling image, the brand pulled out all the stops with a series of TV spots, internet videos, a dedicated website and a social media campaign, topped off with new packaging and restaurant designs. The major new campaign stars the beloved brand founder Colonel Harland Sanders who has returned 35 years after his death age 90, played by comedian Darrel Hammond. Faced with the competition of trendier, healthier fast-food options, KFC played the nostalgia card heavily with numerous references to their rich brand heritage and “the good old days”, a risky marketing strategy that many warned could lead the brand into irrelevance with millenials.

So, did it work? Using the Visibrain platform, we can sort through the 30,000 tweets published over the first two weeks of the campaign, and the links they contain, to find out how Colonel Sanders fared in the fight for brand relevance.

The provocative revival of a much-loved character

The revival of a character as popular as Colonel Sanders was never going to go unnoticed. As the news spread across the web, many took to Twitter to share press articles, blog posts, and their general opinions about the comeback. From May 15th to May 31st, over 30,000 tweets were posted mentioning Colonel Sanders and the @kfc handle. 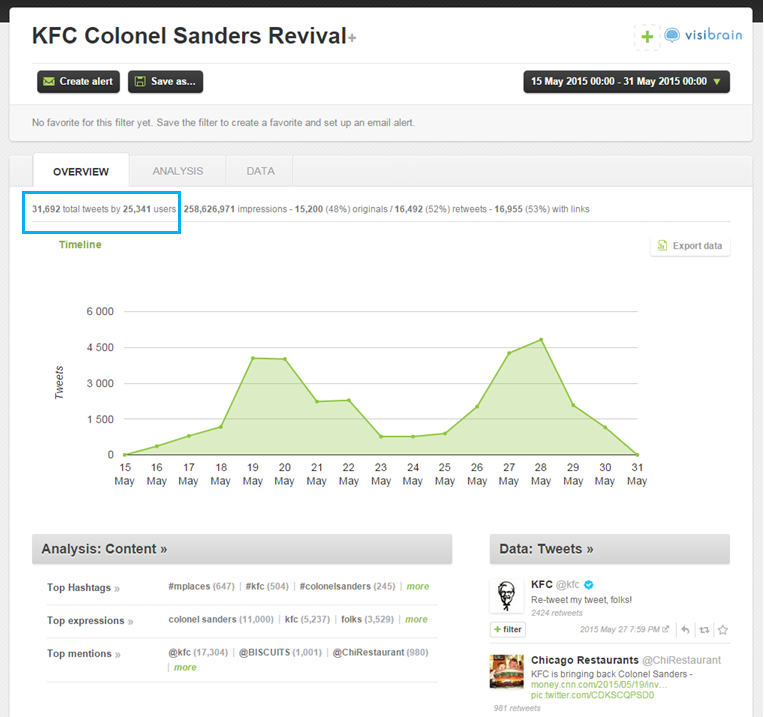 We can see that the number of tweets started to climb on May 19th from 9.09 am, when KFC officially announced that the Colonel was back, with a tweet containing a link to the promo video The State of Kentucky Fried Chicken Address. Word spread quickly and over 4,390 tweets were posted during the rest of the day, with a significant spike occurring from 2 pm as articles published by high-influence users were retweeted. 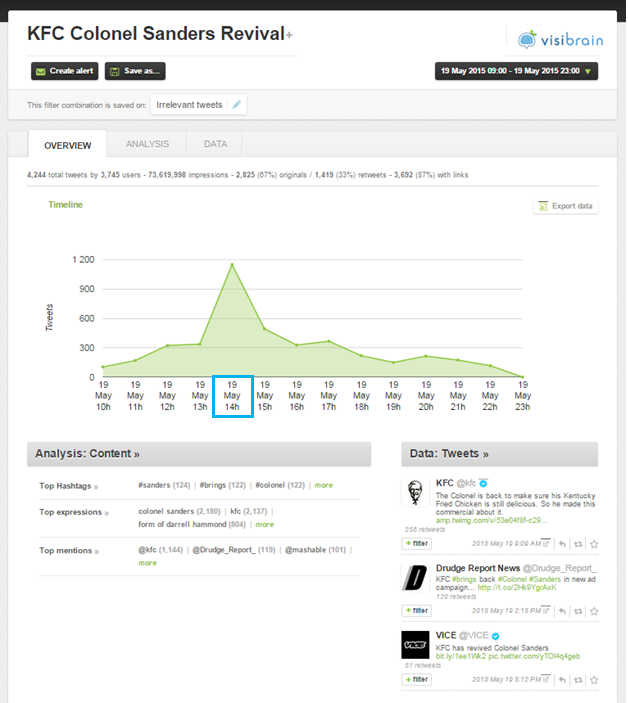 The overall response to the campaign was positive. However, not everyone welcomed the new Colonel with open arms. Harland Sanders was a truly inspirational character who founded KFC through hard work and perseverance, and many fans felt that his reincarnation was far from flattering. The new version of Colonel Sanders is quirky to say the least. With his cackling laughter and an egotistical attitude deemed gimmicky and distasteful by some, many said that the self-made man has been transformed into a caricature of his former self. It’s easy to see why. The new character is generally not very likeable, and though he is often quite amusing, his persona is hardly that of the genuine, hard-working man described by those who used to know him. Even the dedicated website, The Hall of Colonels, meant to be the ultimate homage, is faintly ridiculous.

By using the Visibrain platform’s Focus feature, we can dig deeper into the most commonly used expressions in tweets surrounding the campaign to pick up negative echoes. Using the expression “Colonel Sanders” as an additional filter, the platform reveals that for fans, things weren’t all finger lickin’ good. Certain terms that stand out in the word clouds such as “old white guy”, “plantation owner”, “slave owner”, “weird old George Bush”, suggest that perhaps the Colonel’s “deep south” image was viewed as dated and irrelevant by some. 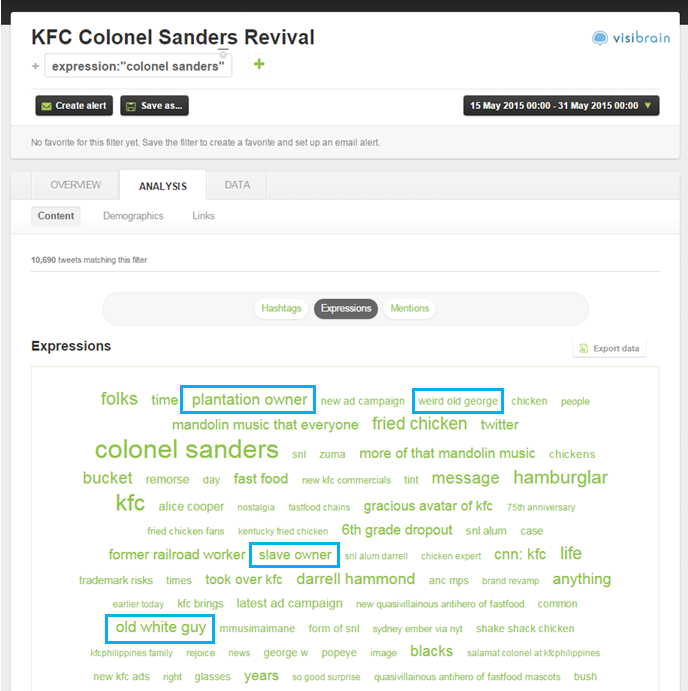 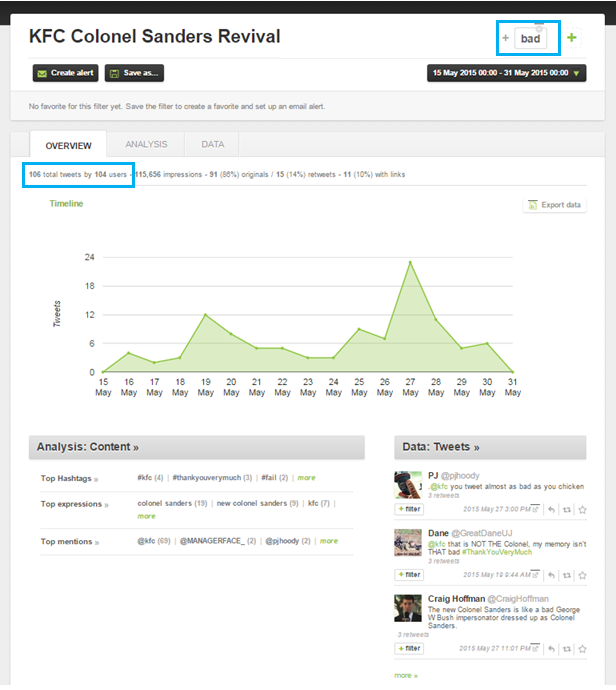 Although this doesn’t seem like a huge amount when compared to the overall number of tweets, KFC estimate that one in five people dislike the new Colonel. But the brand claims to have no regrets about their controversial marketing decision to turn Colonel Sanders into a quasivillanous antihero. Greg Creed, CEO of KFC parent company Yum! Brands recently stated that he was actually pleased about the criticism, claiming that “You can market to love and hate, you cannot market to indifference”.

As was the case with the Hamburglar, Colonel Sanders became the voice of the brand’s Twitter account. His first tweet was posted on May 19th soon after his return had been announced. Interestingly, most of the Colonel’s initial tweets were simply answers to posts commenting on his comeback, appearing to have no real marketing message in mind other than to keep the conversation going. The “southern sass” tone in these responses proved to be quite popular with fans, one of the most retweeted being this exchange with @totalfratmove:

Colonel Sanders taking time out of his new commercial to condemn cargos. #TFM

.@totalfratmove Any pockets that aren't for fried chicken and baked beans are unnecessary.

We can see below that after the initial buzz surrounding the Colonel’s return, the number of tweets gradually dwindled over the next week, only to spike drastically to nearly 8,000 on May 27th. 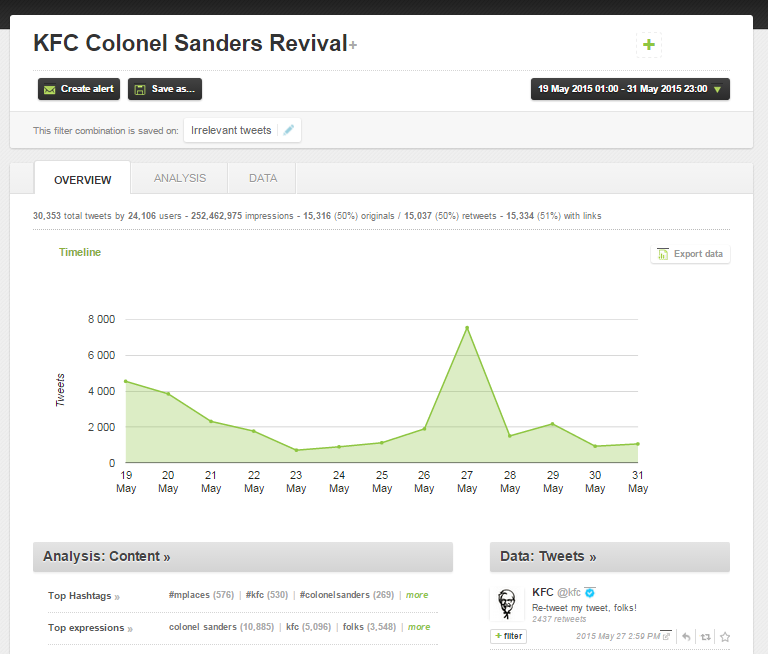 Why? At 2.41 pm, the Colonel posted the tweet below, which was the start of an uninterrupted string of 18 tweets.

Hello, my fellow Americans, Twitterers and fans of the greatest fried chicken on God’s green earth. This is the one, the only, Colonel

The speech, which highlighted core brand values including tongue-in-cheek references to “doing things the hard way” and maintaining “concise communication with fans”, was a deliberate and amusing misuse of Twitter that caused quite a stir. The overall result brought to mind what might happen if your granddad opened a Twitter account. In total, the 18-tweet speech racked up over 5,500 retweets.

The battle of the mascots

So how did Colonel Sanders fare against the Hamburglar? For all their similarities, the two campaigns had many differences in their strategies. For instance, the Hamburglar campaign put a lot of emphasis into building anticipation with teaser videos, whereas the Colonel Sanders campaign was more content-based, using the rich past of Harland Sanders himself to appeal to young audiences.

Using the Visibrain Quicktrends feature, we can compare the number of tweets posted about each brand mascot last month. At first glance, there is a noticeable difference: the Hamburglar had 88,756 tweets last month, compared to 56,306 for Colonel Sanders. On May 6th, the launch of the Hamburglar campaign attracted 32,550 tweets in just one day. 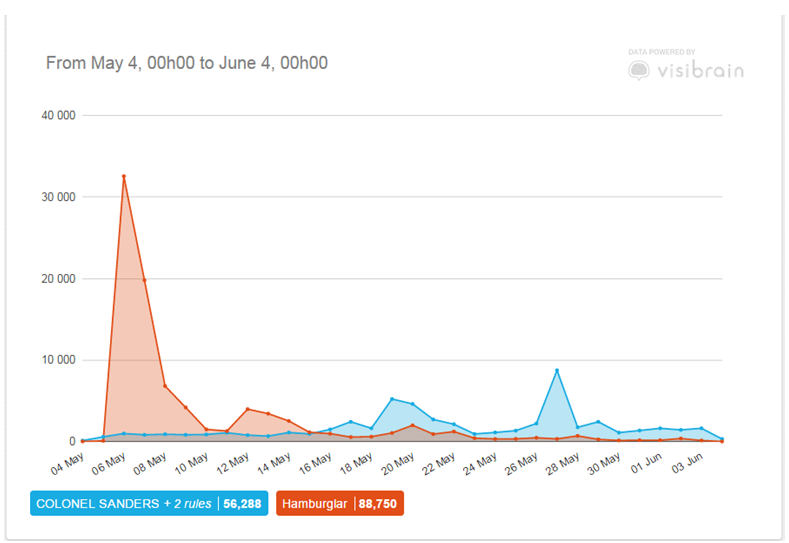 It would seem like a landslide victory for the Hamburglar. However, several factors have to be taken into account. McDonald’s had a far greater social presence to draw on from the start, with nearly triple the number of followers of the KFC account. If we look a little closer, we can also see that although the Colonel Sanders campaign didn’t have the huge initial spike of tweets that the Hamburglar created, KFC managed to maintain a steadier flow of tweets over the first two weeks of activity. However, only time will tell if KFC’s strategy will continue to generate interest and have a real impact on the general image of the brand now that the initial buzz has wound down.

With the two brands having launched their nostalgia-based campaigns in such quick succession, there is now growing speculation on Twitter as to which fast food giant will be next to try to take us back to the good old days.

First, it was the return of the Hamburglar. Now it's Colonel Sanders. Could Taco Bell's Chihuahua be next? http://t.co/2XzpoWAg0j

If we use the Visibrain feature to analyze tweet content, we can search for top expressions using “Hamburglar” and “Colonel Sanders” as keywords. Several other fast-food brand names appear in the word clouds, such as Taco Bell and Shake Shack. 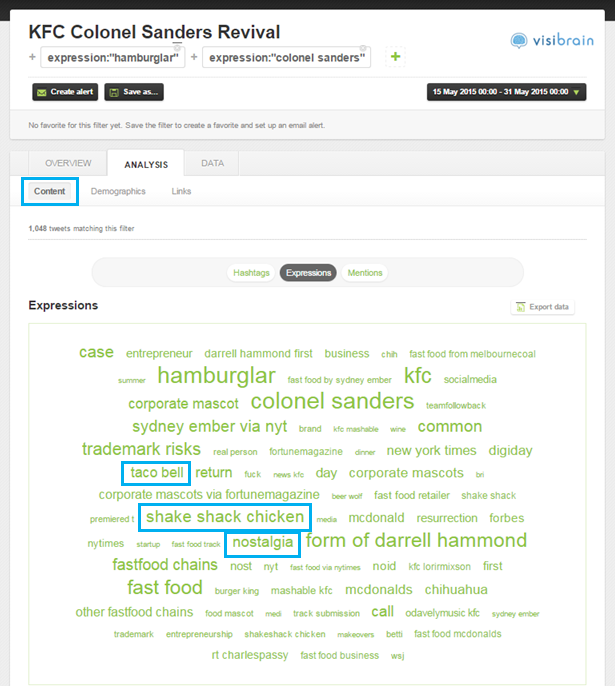 KFC might just be the last fast-food giant to jump on the nostalgia bandwagon, as few brands can boast such a rich heritage. The Hamburglar and Colonel Sanders campaigns are undeniably good examples of the saying “there’s no such thing as bad publicity”. The Colonel wasn’t the only one getting bad reviews, as the new version of the Hamburglar was judged as “weird” and “a bit creepy” by a lot of fans. But in the end, whether fans loved or hated the new versions of their favorite mascots, no one can deny that their respective campaigns got people talking.