It’s no secret that provocative advertising is on the rise, and for good reason: an edgy ad can mean the difference between obscurity and success. However, the strategy is a risky one, as UK restaurant chain Gourmet Burger Kitchen found out the hard way this week. The brand took a gamble on an ad campaign that poked fun at vegetarians, and thousands of people took to Twitter to protest.

So how did they get things so wrong, and was it all worth it? We used the Visibrain Twitter monitoring platform to try and find out.

Gourmet Burger Kitchen’s crisis, which culminated in the ads being taken down on Monday this week, have generated 8,200 tweets so far since January 14th, 46% of which were retweets. 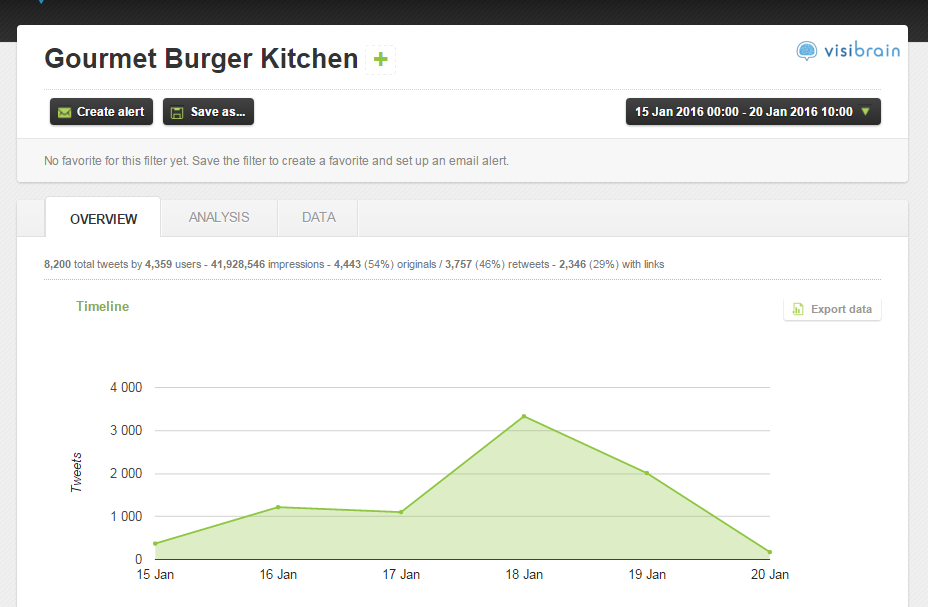 The brand’s troubles started when they launched their controversial campaign late last week. The posters in the London underground depicted phrases such as “Vegetarians, resistance is futile”, “You’ll always remember the day you gave up being vegetarian” and “They eat grass so you don’t have to” along with a picture of a cow.

Unsurprisingly, the message was not to everyone’s taste. Vegetarians and Vegans, as well as more than a few meat eating customers, were outraged by the brand’s seemingly flippant attitude towards vegetarianism and the slaughter of animals. The first tweets appeared on January 14th:

.@gbkburgers becoming first burger place of 2016 to unnecessarily use veg*ns as butt of joke in new tube ad. Shame, I liked the food there

Anger around the campaign grew steadily from that point, and it didn’t take long for people to start making spoofs of the campaign’s message:

A dedicated hashtag was also used by offended customers, and it was as negative as you can get: #gourmetmurderkitchen. By filtering on tweets containing the hashtag and sorting them by date, we can see that #gourmetmurderkitchen appeared for the first time on January 15th at 10.47 pm: 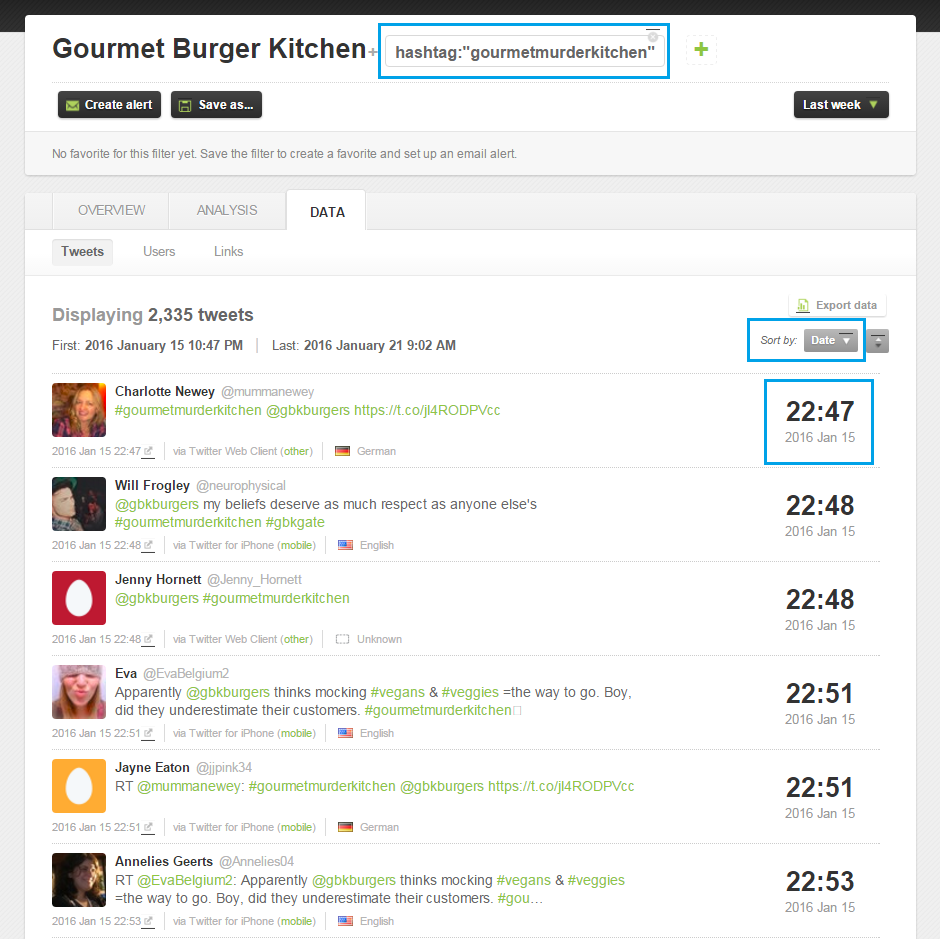 Use of the hashtag escalated quickly, and it appeared 2,116 times between January 15th and January 19th.

Over that same period the Gourmet Burger Kitchen Twitter handle, @gbkburgers, was mentioned 5,565 times. If we look at the top expressions used in tweets mentioning the brand, the results are far from positive: “insulting ads”, “poor taste”, “disgraceful PR”, “idiots” and “awful marketing” feature prominently in the word cloud: 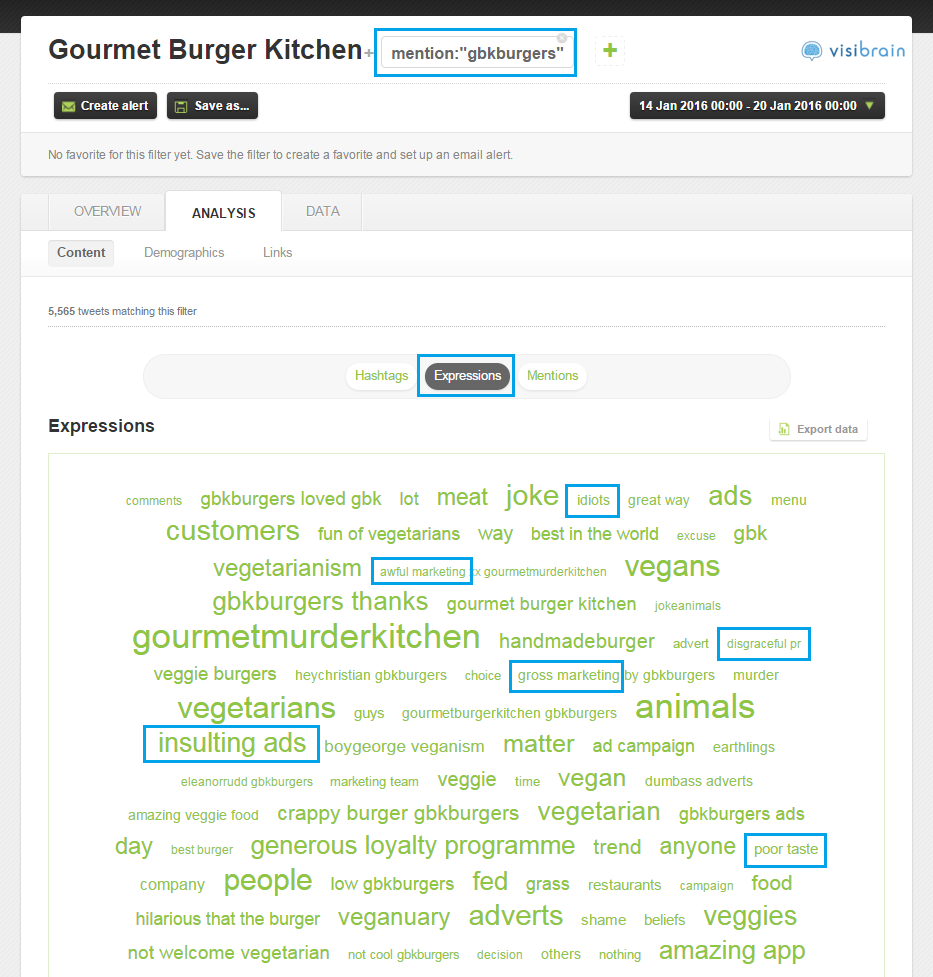 It didn’t take long for the national media to pick up on the campaign. If we take a look at the users with the highest audiences who were tweeting about Gourmet Burger Kitchen, we can see that several national news accounts such as The Independent and The Telegraph, as well as celebrity Ellie Goulding, feature at the top of the list with millions of followers: 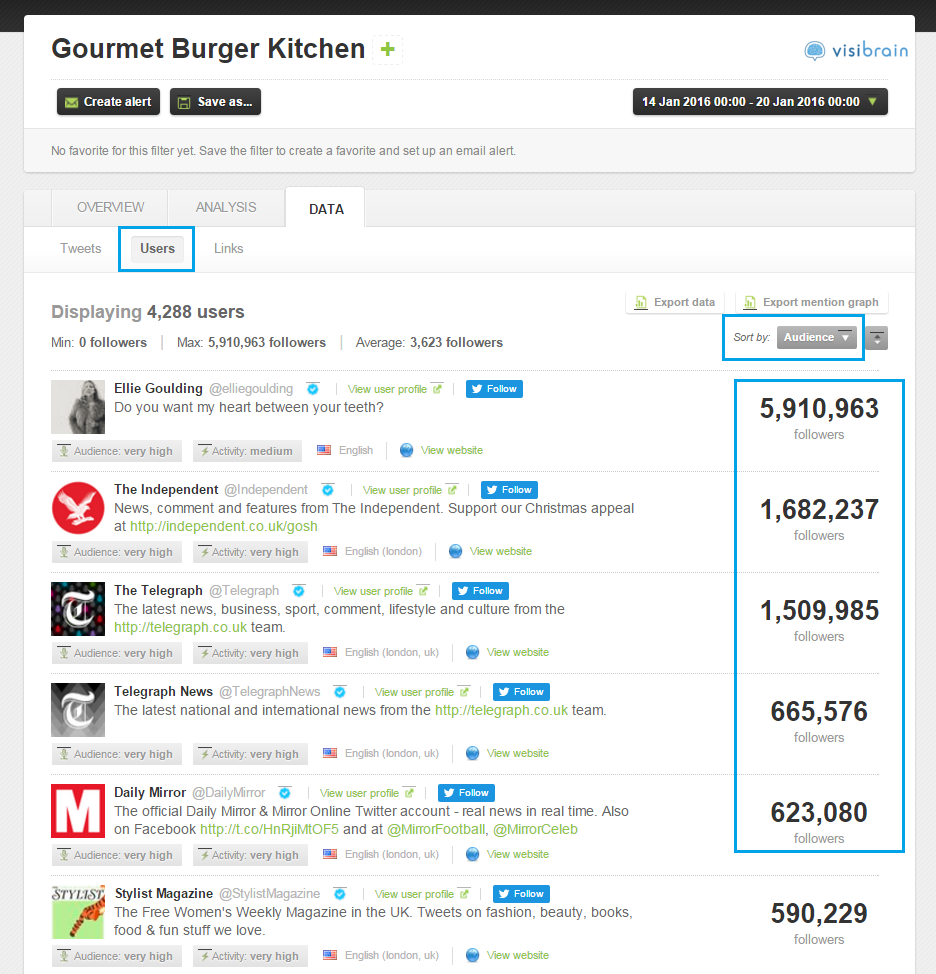 The number of tweets continued to grow, peaking on January 18th when the brand made the decision to pull the campaign.

So how did the brand respond to the crisis? Initially, @gbkburgers responded lightheartedly to the first few complaints on January 15th:

@LudovicaIaccino Hi Ludovica, we don’t, really. Our veggie burgers are rather ace. Just playing up the carnivorous side is all.

@aeldron We only alienate pizza eaters (the scoundrels). This is in no way meant seriously, we like all the ‘vores. #herbivores #carnivores

@LFPassmore you're always wanted, Laura. We're just talking up our carnivorous side thru Jan. Herbivore, carnivore, we like all the 'vores.

However, once things really started to heat up, it was obvious that a more careful approach was needed. The brand’s Twitter account went silent on the subject until January 18th, when it posted the following messages: 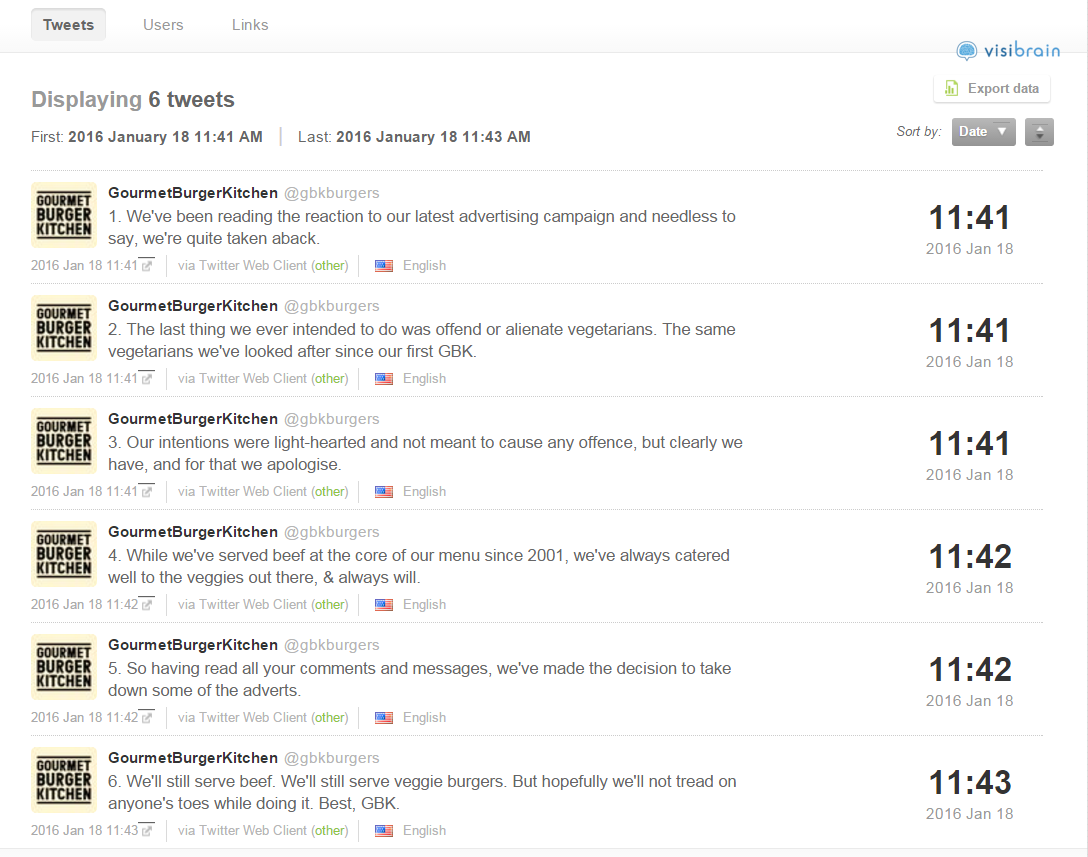 The brand seemed genuinely surprised by all of the outrage, but although they were obviously trying to make amends, the tone of their final post made their apology sound a little inauthentic, and some people were far from impressed:

@gbkburgers I'm sorry to say that your original message says it all. I won't be returning, regardless of your PR turnaround.

So was it all truly down to short-sightedness from the brand, or a contrived publicity stunt? Gourmet Burger Kitchen’s ad disaster seems too silly to be real; it’s certainly hard to believe that they hadn’t considered the possibility that many would find their campaign offensive. The timing of the campaign was also poorly chosen: right in the middle of Veganuary, a month when people are being encouraged to test the vegan diet.

It all becomes even more surprising when you take into consideration that GBK have a reputation of catering to vegetarians, offering several meat-free options on their menu that were popular with the vegetarian community. Deliberately poking fun at part of your customer base does not seem like a wise move for any brand, as @elliegoulding pointed out:

@gbkburgers Annoyed with you because you actually serve amazing veggie food and I get it a lot. Take those dumbass adverts down

The first question to ask would be: Just how much damage did this crisis truly do to Gourmet Burger Kitchen? Admittedly, the overall tweet volumes involved were high enough to be alarming for the brand and the response from the vegetarian and vegan community was passionate: Gourmet Burger Kitchen may have permanently tarnished its reputation with their campaign, with many customers vowing they would never eat there again.

However, it wasn’t all bad news for Gourmet Burger Kitchen. The campaign certainly attracted a lot of attention: if we use the Visibrain Quick Trends feature to compare Twitter activity around the brand before and after the crisis, we can see that there was a huge spike in tweet volumes at the end of last week: 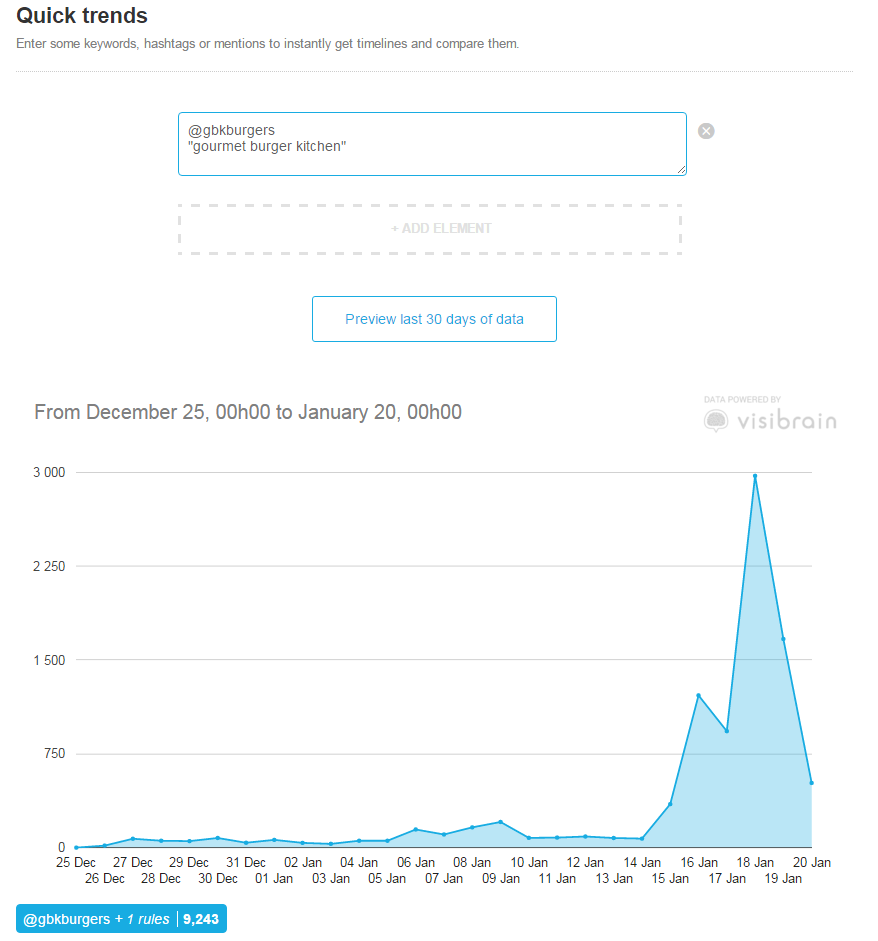 The brand was mentioned several times in the national media and massively shared on social media.

Also, not everyone thought that the brand’s campaign was bad. Some GBK fans piped up to defend the restaurant chain:

@gbkburgers Ugh, don't roll over for those who can't take a joke. The ads are brilliant.

Keep up the good work @gbkburgers - too many people easily offended these days. 😴🙄

Even some vegetarians admitted that they would still go to Gourmet Burger Kitchen in spite of it all:

@gbkburgers it was a bad, bad joke...but only a joke - as a committed veggie, I'll continue to visit GBK. But please, no more jokes 😉

@gbkburgers now now. You're trending on twitter. Best marketing campaign ever. This veggie loves you guys AND has a sense of humour. ❤

However you look at it, Gourmet Burger Kitchen have certainly recieved a lot of attention from this whole affair, although they may have lost a few customers in the process.

So, true crisis or provocative marketing? Let us know what you think.