Sunday evening was the much-awaited first episode of the new Top Gear, hosted by Chris Evans and Matt LeBlanc. Fans have been waiting with baited breath to see whether the new hosts would meet the show’s previous standard, and many were not impressed. The new version of one of the BBC’s most popular shows was highly criticized on social media and in the press, and we used Visibrain to find out what people had to say.

Mentions spike during the show

The new Top Gear certainly didn’t get off to good start on social media. Mention volumes spiked at 8 pm for the beginning of the show: 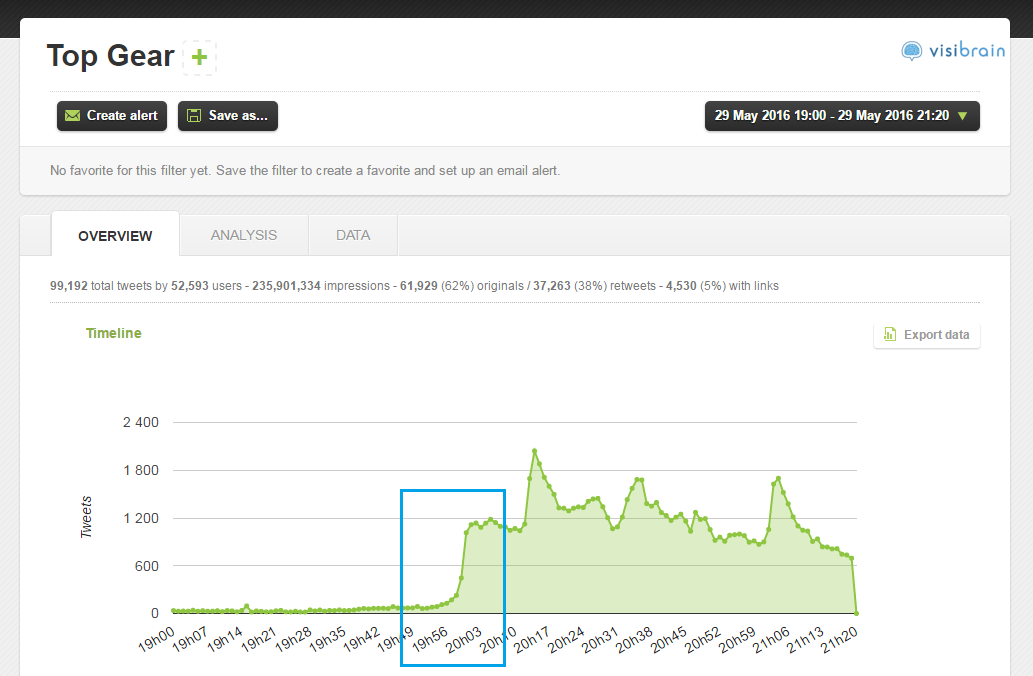 It didn’t take long for the backlash to begin. The first negative comments started mere minutes into the episode:

This new #TopGear isn't bad...If the tv is muted, and you have your eyes closed, and throw the tv out the window...or yourself...

By the end of the hour, there had already been 74,909 mentions of Top Gear online, and things weren’t looking good for the new hosts:

Not to worry, I've turned off #TopGear and found this much more stimulating activity... pic.twitter.com/nYKygHtKOE

After the show, the number of mentions continued to rise as more and more viewers gave their thoughts on the new Top Gear. The show was slated on Twitter, but many also posted reviews on Facebook and Youtube:

All in all, a poor result for Top Gear.

Top Gear gets a mostly negative verdict on social

There have been over 270,000 online mentions of Top Gear since Sunday’s episode, and the overall verdict is not good. The top hashtags currently associated with Top Gear are negative: #FlopGear, #WontWatchAgain and #RIPtopgear have been used thousands of times and appear in the top 10: 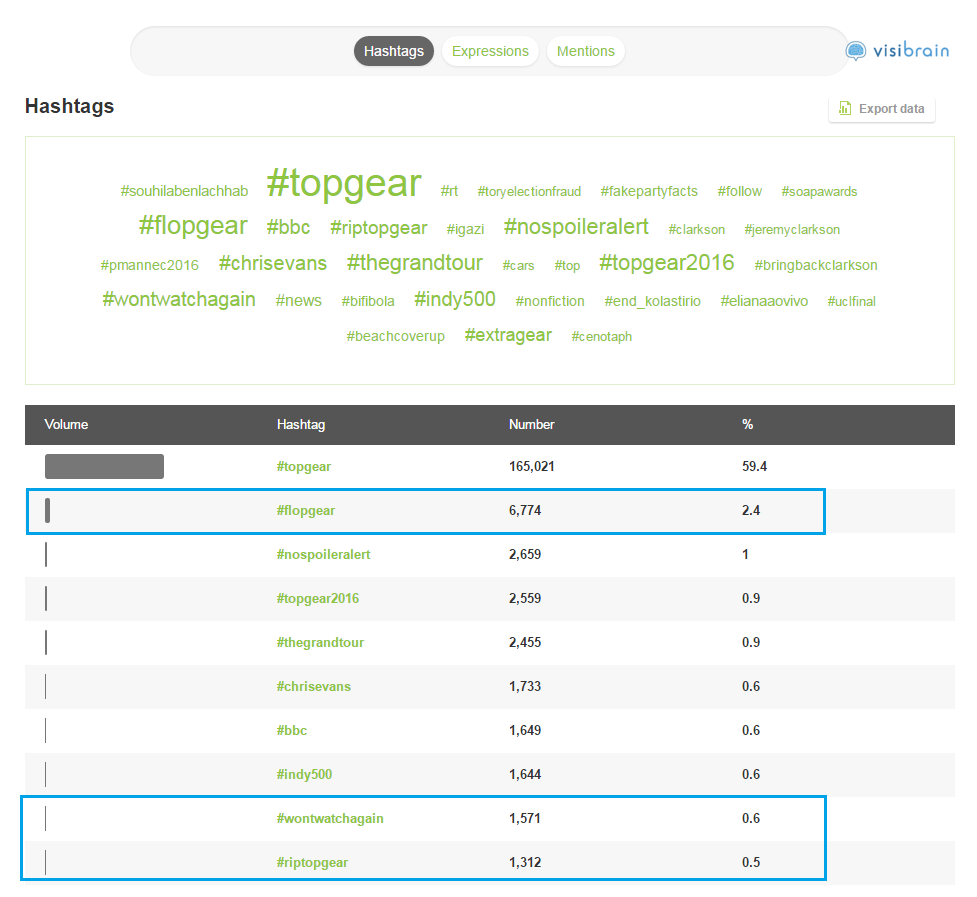 Watched the new Top Gear. Chris Evans is just too try-hard to carry that role. Comes across as frantic and annoying. LeBlanc was great.

Evans is like a child on too many e-numbers. Trying to be funny but annoying everyone else...#RIPTopGear #TopGear pic.twitter.com/OEOnZgwHGY

Why does Evans feel the need to scream and jump around so much? He's like a carrot stick on acid #TopGear

The hashtags most commonly associated with Evan’s performance are far from positive: #fail, #boring, #stopshouting, #bringbackclarkson and #cringe all appear frequently in tweets: 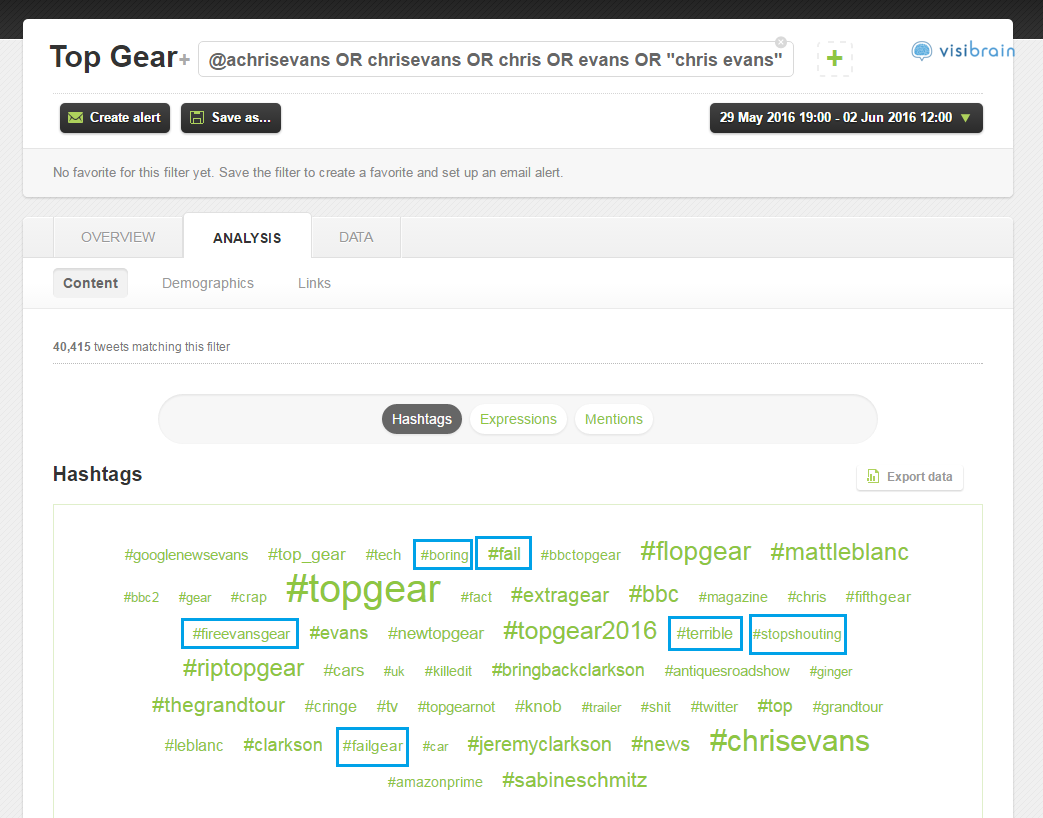 As well as being generally unpopular on social media, Evans lost out in terms of mention volumes too. On Sunday night, he was outstripped on Twitter by Jeremey Clarkson, who was mentioned 22,230 times. Evans himself only appeared 20,625 times. Matt Leblanc comes up as the thrid most-mentioned host, followed by Clarkson’s co-stars Richard Hammond and James May:

Things didn’t look much better in the press: there have been thousands of articles, blogs posts, Youtube reaction videos and more covering Top Gear’s rocky start.

Interestingly, the most shared article was from Mashable, covering the fact that on the night of the episode, a lot of nasty tweets aimed at Chris Evans (@achrisevans) missed their intended target. Twitter users got his account mixed up with that of Captain America actor Chris Evans (@ChrisEvans), who found himself inexplicably showered with abuse on Sunday night: 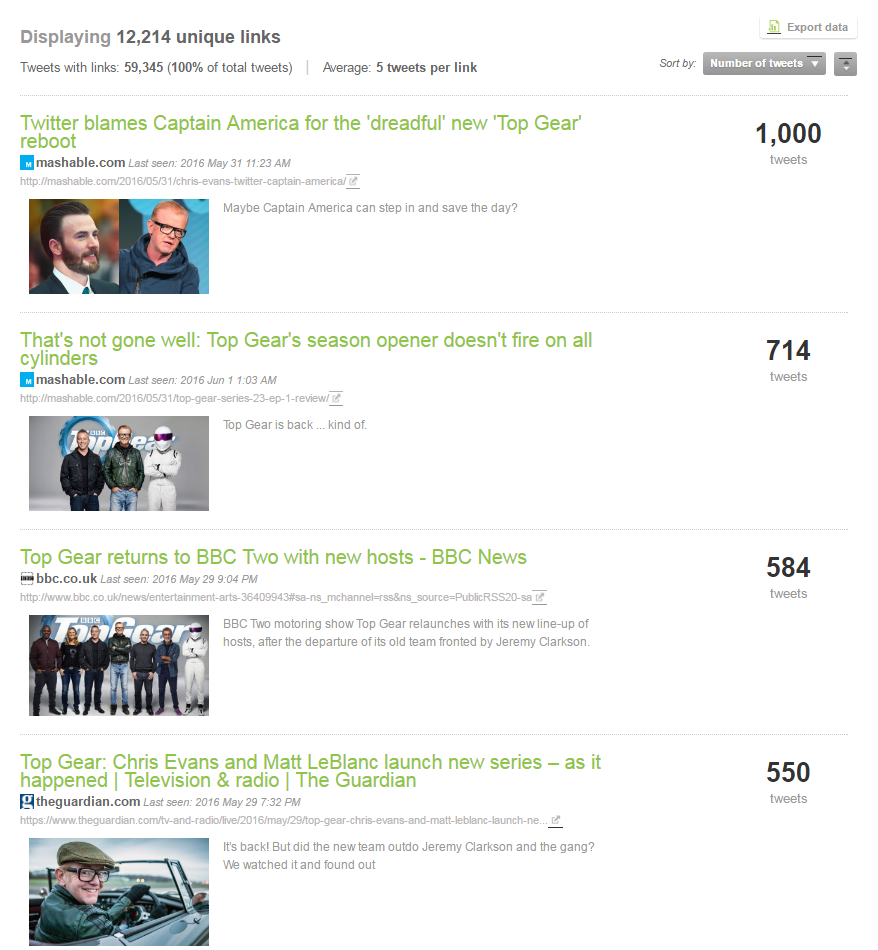 The three other most-shared articles from the press are another piece from Mashable about the social media backlash aroudn Top Gear’s new hosts, and two less than glowing reviews of the show from the BBC and the Guardian.

The new Top Gear got an undeniably bad reaction on social media, but was it really the total disaster some made it out to be?

Not everybody had bad things to say. There were a fair few positive comments, with many people pointing out that it was only the first episode and the show needed time to mature. Some also pointed out that most of those complaining about the show’s new format were huge fans of Clarkson and didn’t even want to give the show a chance:

Essentially, if you're a fan of Clarkson, you're probably hating this. If you're a bit more open-minded, it's alright. #TopGear

I think everyone just wants to hate the new #TopGear because it's cool to do so. However it was actually very good for a first episode

Evans and his crew are smart enough to keep just enough of the old #TopGear and update the rest gently. I doff my producer's hat.

I'm not actually watching Top Gear, but now might be a good time to remind people that it took YEARS until it gelled for Clarkson et al

Chris Evans himself spoke up on Twitter, defending the show’s ratings and audience. He was retweeted hundreds of times:

The new Top Gear is in for a bumpy ride on social media. The show may not have had the best of starts, but the producers may manage to turn it around: we’ll have to wait and see how audiences react to the next episode.

Want to read more of our posts? Stay up to date by subscribing to our newsletter and receive media monitoring best practices, social data trends & exclusive case studies: