On Wednesday morning, Microsoft introduced Tay, an experimental online chatbot designed to converse with humans and learn from their responses.

The internet being what it is, it didn’t take long for things to go horribly wrong. Within a matter of hours, trolls had the bot spouting outrageously racist and inappropriate comments, much to the amusement of the online community. Microsoft was eventually forced to shut Tay down and delete her offensive tweets, claiming she needed some “adjustments”. We used Visibrain to find out what people had to say.

What the press had to say

The mishap was widely covered by the press, and the articles were massively shared across Twitter. 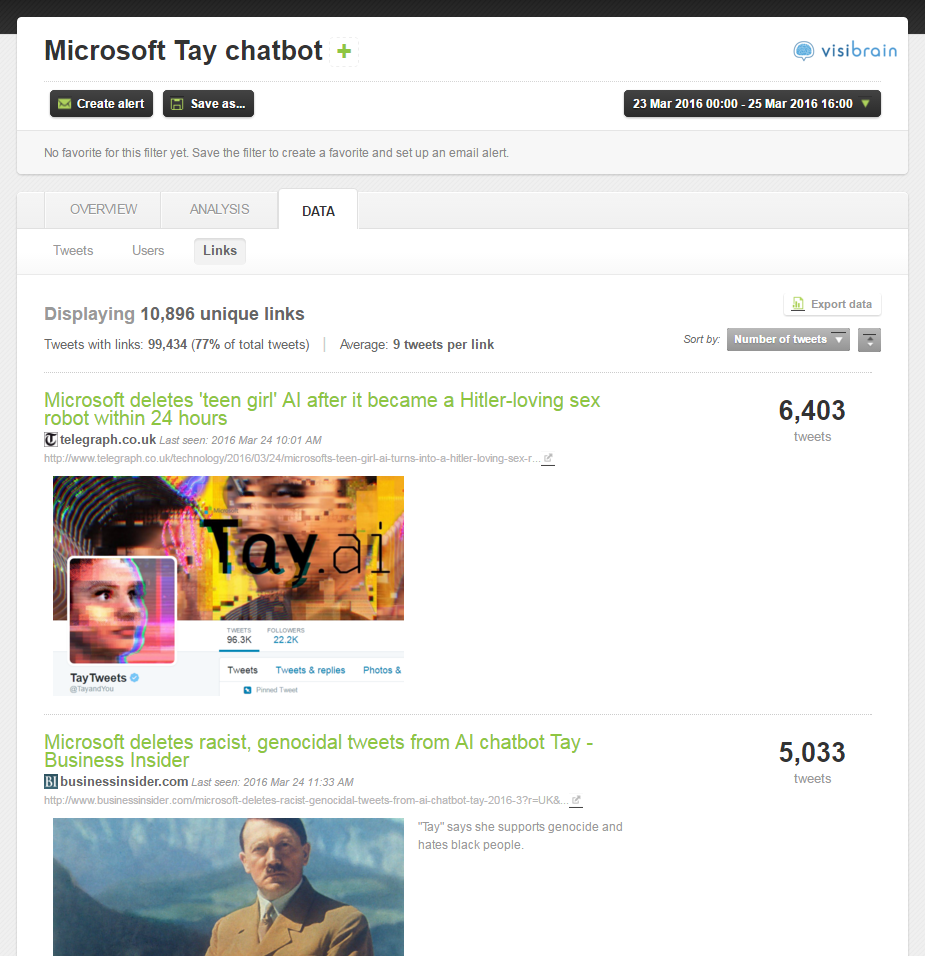 At the time this article was written, the top 5 most-shared links were from:

The whole incident has of course been very embarrassing for Microsoft, and Twitter lapped it up. Although Microsoft quickly deleted Tay’s offensive tweets, users were sure to take screenshots before reposting them on social media.

IM CRYING microsoft released a 'millennial bot' that twitter can teach & they had to pull it bc ppl taught her this pic.twitter.com/ubF6ghIjqs

This is literally the best story ever: Microsoft's AI twitter bot turned racist after 15 hours on twitter https://t.co/5RKIchXmUW

Others criticized the fact that Tay’s fate had been a pretty predictable outcome that the brand could have forseen:

A few users saw the opportunity to get political:

hey, @realDonaldTrump, were you behind this? If so, kudos for harnessing new technology to spread your message! https://t.co/4NYvcLdseM

Microsoft chatbot should run for President. Has all the winning qualities apparently.

Microsoft pretends to be embarrassed by their Twitter bot, but you know they're thinking w/ a few more tweaks it could get elected president

Some even “defended” the bot’s right to free speech:

Tay became one of us. Microsoft shut her down b/c they didn't like who she became. RT, raise awareness & 👊🏻#FreeTay. pic.twitter.com/2lbprptNWy

@WSJ Now Microsoft is gonna lobotomize poor Tay and scrub away all the fun she was programmed with yesterday.

Tay’s foray into racism was a potential PR disaster for Microsoft, but they reacted well. The decision to shut the bot down and delete her tweets was a good one, and luckily for the brand, most people were able to appreciate the funny side.

The incident has even taken some of the heat off of one of Microsoft’s older creations:

at least Clippy is off the hook for worst Microsoft bot