Last night David Cameron and Nigel Farage appeared on ITV for a live debate around the EU referendum. Tens of thousands of people followed the debate on Twitter. Read on for social media monitoring stats, top tweets and how Twitter users showed their support for the opposing campaigns.

Twitter certainly got political last night: the debate started at 9 pm and in just one hour, 136,372 tweets had been posted by 41,599 Twitter accounts.

The discussion online continued long after the end of the debate. By midnight, the number of tweets had almost doubled: 244,632 tweets from 69,251 people, an impressive turnout. 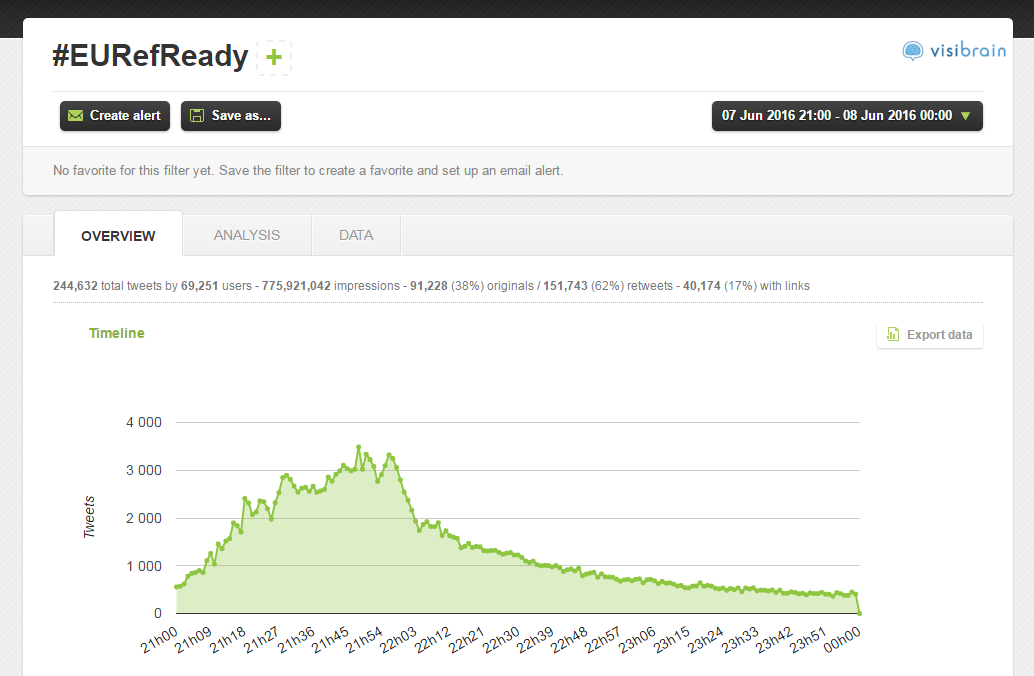 ITV’s dedicated hashtag #ITVEURef was trending for hours and was by far the most popular hashtag of the debate, used 149,839 times.

The following of the debate was so great that it even outstripped online activity around the launch of the new season of Big Brother, which aired last night. 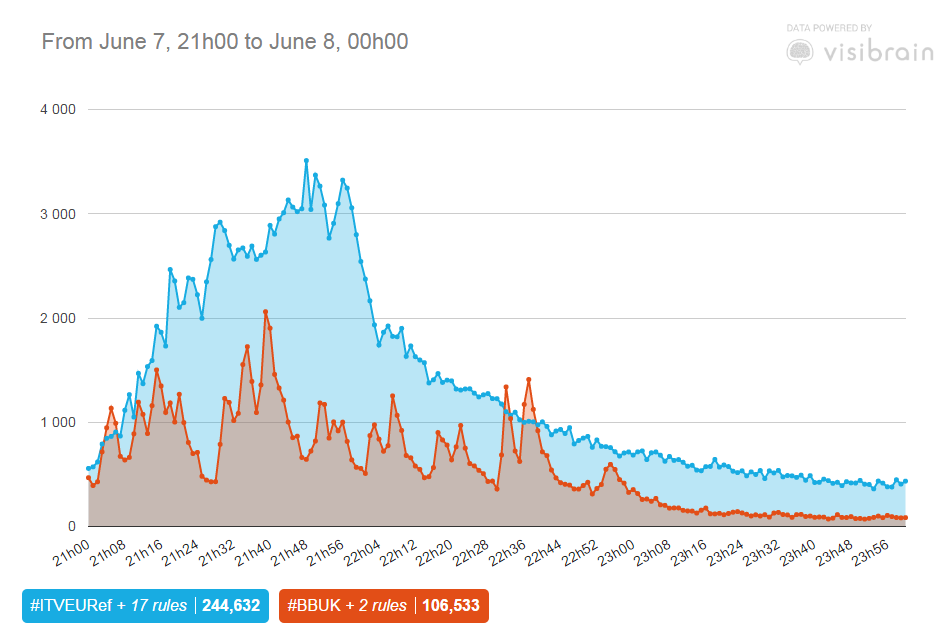 Considering that Twitter activity around TV shows often outstrips that of more serious topics, this is an impressive result for the EU debate.

Out of the two speakers, David Cameron got the most mentions, appearing in 76,957 tweets. He faced some pretty harsh criticism for some of his policies and views on the EU:

Appalling lie: "we don't have to let EU criminals in." How dare you Cameron. Alice Gross is dead because we had no choice. #ITVEURef

SHAME on Cameron misleading public when he says he is putting additional £12 billion into the NHS. Liar. I'll say it again. Liar #ITVEURef

Farage was close behind with 61,715 tweets, but the general opinion around him was not much better, with many commenting on his poor reaction to criticism and treatment of the female members of the audience:

Bad tempered and patronising. This is a bit of a car crash for Nigel Farage. And Leave. #ITVEURef

That clip of Farage telling a young woman to "calm down" because she asked about his incendiary comments on Cologne pic.twitter.com/CSn437nNQP

This tweet from Brian Cox @ProfBrianCox commenting on one of Farage’s statements was the most retweeted of the debate:

Did Farage really just say that if we leave the EU we'll have a smaller pharma industry and that will be good for alternative medicine ?

But some believed that he was treated unfairly by the audience:

That's three audience members coming across as very smug, not listening, arrived with their own prejudices. And I'm no Farage fan. #ITVEURef

Farage may not have gotten the most mentions, but he was by far the most retweeted of the two speakers. He tweeted four times yesterday evening and retweeted 2,489 times. David Cameron tweeted only twice, and was retweeted just 462 times, in spite of having 1,470,476 followers compared to Farage’s 310,000.

The #VoteLeave campaign shouts the loudest

So what was the verdict of the debate on Twitter? At first glance, it would seem that the debate was a victory for Brexit.

The top hashtags show that #VoteLeave was used 20,803 times, whereas #VoteRemain was used just 3,433 times.

However, a closer look at Twitter data reveals that there were a large number of variations of the #Voteremain hashtag, including #Votein, #Strongerin and #remain. Added together, the numbers rise much higher, going well over 10,000, a much better result.

It’s also no secret that the Leave campaign is very active on Twitter. The #VoteLeave Twitter community is not only much larger than its opposition, it is also better organized and more engaged.

Subscribe to our newsletter to stay up to date with all of our case studies: